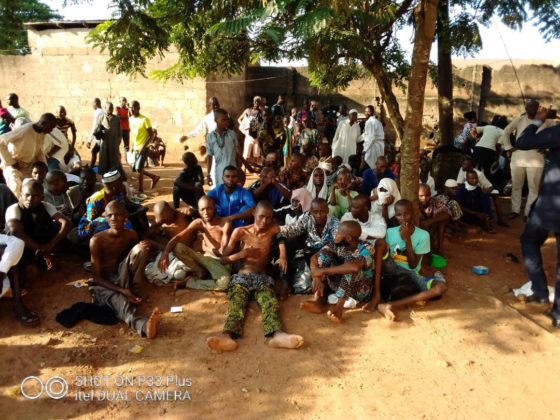 People sit on the ground after being freed by police from an Islamic rehabilitation centre in Ibadan, Nigeria in this picture released by Nigeria Police November 5, 2019. Nigeria Police/Handout via REUTERS ATTENTION EDITORS - THIS IMAGE WAS PROVIDED BY A THIRD PARTY. NO RESALES. NO ARCHIVE.

LAGOS (Reuters) – Nigerian police have freed 259 people being held at an Islamic rehabilitation center in the southwestern city of Ibadan, police said on Tuesday, adding that some complained of being beaten regularly by their captors.

It was the latest in a series of raids on Islamic institutions in Nigeria in recent weeks. More than 1,000 people, many of them children, have been rescued in total.

Many captives have said they were physically and sexually abused and chained up to prevent them escaping.

The raids are increasingly embarrassing for President Muhammadu Buhari, a Muslim who has called on police to crack down on such centers.

Other sites raided in major police operations have been in the mostly Muslim north of the country. Ibadan is located in the south, which is mostly Christian.

“Yesterday, 259 persons were released. We had women, men and teenagers,” Olugbenga said. Some people were locked inside a building and some were chained.

Images from local TV station TVC taken shortly after the captives were released showed a group of mostly young men and teenaged boys. An infant was also among the group. Many were emaciated.

According to Olugbenga, nine people including the owner of the rehabilitation center had been arrested and were under investigation.

Spokesmen for the president and vice president both declined to comment.

But the president’s office issued a statement in October that said “no responsible democratic government would tolerate the existence of the torture chambers and physical abuses of inmates in the name of rehabilitation of the victims”.

At other raided facilities, some parents thought their children were there to be educated and even paid tuition fees. Others sent misbehaving relatives to Islamic institutions in order to instill discipline.

(Reporting by Alexis Akwagyiram in Lagos; Additional reporting by Felix Onuah and Camillus Eboh in Abuja and Ardo Hazzad in Bauchi; Editing by Catherine Evans, Alex Richardson and Mike Collett-White)