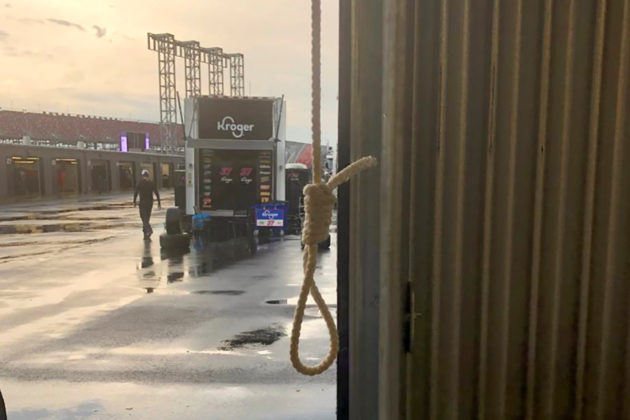 A noose found in the Number 43 garage stall, assigned to driver Bubba Wallace, at Talladega Superspeedway in Talladega, Alabama, U.S. June 21, 2020 is seen in a photograph released by NASCAR on June 25, 2020. NASCAR/Handout via REUTERS

(Reuters) – NASCAR said on Thursday it had completed it’s own investigation into the noose found in the garage of Bubba Wallace, the only Black driver competing in the top series, without determining who did it or how it got in the stall.

An FBI investigation into the incident that put a global spotlight on NASCAR determined on Tuesday that no federal crime had been committed.

The noose, a symbol connected to lynching and America’s slave history, found in Wallace’s stall at the Talledaga Superspeedway on Sunday may have been there since last October.

NASCAR continued to conduct its own probe in an effort to discover how the noose got into the garage and how it went unnoticed for so long.

While NASCAR said it was able to roughly pinpoint when the noose was made, there was no way given garage access and procedures at the time to determine with any certainty who tied it and why.

NASCAR president Steve Phelps said the noose was not in place when last October’s race began but was created at some point during that weekend.

“We have completed our own investigation,” confirmed Phelps during a conference call on Thursday. “I could speculate but it would not do any good.

“I know we like complete resolution here and have all the answers but based on all the video and photographic evidence and all the interviews we were not able to determine who crafted the noose.

“I know that’s not fulfilling, I wish there was more we could do but we can’t so we have drawn this matter to a close.”

NASCAR said in wake of the incident it had conducted a sweep of all 29 tracks the series visits and 1,684 garage stalls and found 11 with pull down ropes tied in a knot and only one noose.

NASCAR will also consider changes to its code of conduct and sanctions and mandate all members involved in the sport complete sensitivity and unconscious bias training.

“Our ultimate conclusion from this investigation is to ensure that this never happens again,” said Phelps. “That no one walks by a noose without recognising the potential damage it can do.”

(Reporting by Steve Keating in Toronto. Editing by Christian Radnedge)