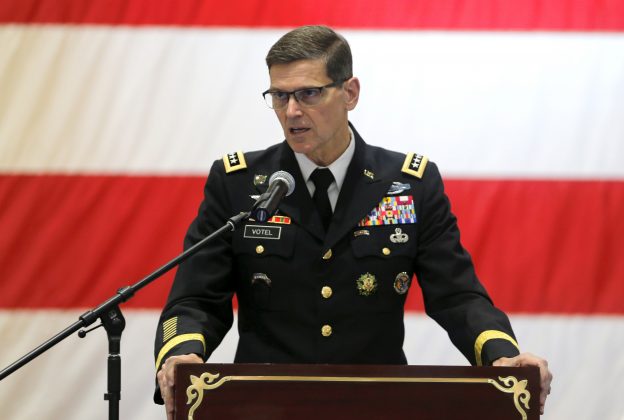 WASHINGTON (Reuters) – The general overseeing U.S. forces in the Middle East said on Thursday that he was under no pressure to withdraw forces from Syria by any specific date, after President Donald Trump ordered the drawdown of most U.S. troops from Syria.

“What is driving the withdrawal of course is our mission, which is the defeat of ISIS and so that is our principal focus and that is making sure that we protect our forces, that we don’t withdraw in a manner that increases the risk to our forces,” U.S. Army General Joseph Votel, head of the U.S. Central Command, said during a House Armed Services Committee hearing.

“There is not pressure on me to meet a specific date at this particular time,” Votel said.

Trump had ordered the withdrawal of all 2,000 U.S. troops in Syria in December after he said they had defeated Islamic State militants in Syria. The abrupt decision sparked an outcry from allies and U.S. lawmakers and was a factor in Jim Mattis&rsquo; resignation as defense secretary.

But Trump was persuaded by advisers that about 200 U.S. troops would join what is expected to be a total commitment of about 800 to 1,500 troops from European allies to set up and observe a safe zone being negotiated for northeastern Syria.

About 200 other U.S. troops will remain at the U.S. military outpost of Tanf, near the border with Iraq and Jordan.

Thousands of people could still be left inside Islamic State’s last enclave in eastern Syria, the U.S.-backed Syrian Democratic Forces (SDF) said, as waves of evacuations from the tiny area continued on Thursday.

The SDF has said it wants to ensure all civilians have been evacuated before launching a final assault on the besieged enclave of Baghouz. It is the last shred of populated territory held by Islamic State, which once controlled swathes of Iraq and Syria.

“We will need to maintain a vigilant offensive against this now widely dispersed and disaggregated organization that includes leaders, fighters, facilitators, resources and toxic ideology,” Votel added.

(Reporting by Idrees Ali and Phil Stewart in Washington; Editing by James Dalgleish)