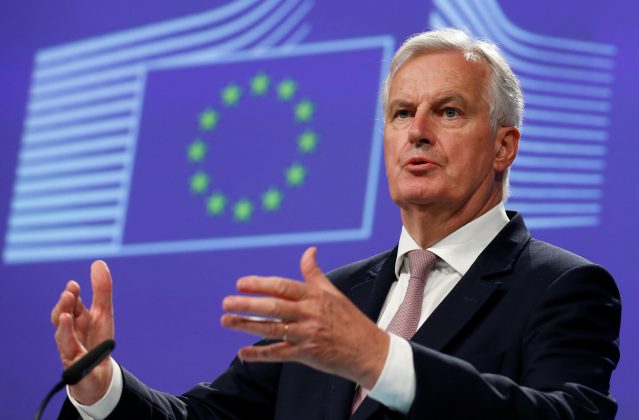 By Alastair Macdonald and Robert-Jan Bartunek

BRUSSELS (Reuters) – The EU’s negotiator pressed Britain on Wednesday to offer more post-Brexit rights to European expats and accept it will pay a hefty sum on leaving if it wants a quick start to talks on a future trading relationship.

Michel Barnier, who holds a first full round of talks next week, betrayed impatience with London during a Brussels news conference. Britain had yet to respond to detailed proposals from him on many issues, he said, and had fallen short on what it has offered on citizens’ rights, as well as on what it owes.

Asked his view on Foreign Secretary Boris Johnson’s remark on Tuesday that Brussels could “go whistle” if it thought Britain would pay what Johnson called “extortionate” demands, Barnier showed no desire to join in any cross-Channel banter:

“I’m not hearing any whistling, just the clock ticking,” the Frenchman said, echoing his refrain of the past year that time is tight to conclude terms for an exit in March 2019 that can limit disruption for businesses and millions of people.

Barnier said he wants detailed proposals from the British next week to match those made by the EU on issues they want settled in a withdrawal treaty.

These include the rights of expats left on either side of a new EU-UK border, a methodology for calculating how much Britain will owe to cover commitments to the EU and how to manage the new border, notably on Ireland.

Only if there is progress on all three of these would EU leaders agree to open negotiations on a future free trade deal.

For now, however, 3 million Europeans in Britain would have fewer rights under London’s proposal than Britons on the continent, notably in the matter of being able to bring in relatives, he said. And those rights in Britain would not be guaranteed by the treaty or ultimately by the EU’s judges in Luxembourg.

Even some EU governments concede that the demand for much of the relations between Britain and the bloc to be under ultimate scrutiny by the European Court of Justice – anathema to many of those who voted for Brexit a year ago – is a “maximalist” position and may have to be moderated in negotiations.

An early indication of how far apart the two sides really are will come from Monday, when British officials are due in Brussels for the first of four, week-long, monthly rounds of negotiations which they hope can show enough progress to see EU leaders agree at a summit in mid-October to open trade talks.

Barnier urged London to be clear on its willingness to pay a bill, which the EU executive have put at potentially 60 billion euros ($70 billion), if it wants to win the Union’s trust.

He dismissed suggestions from Brexit supporters that the EU was holding Britain to “ransom” and stressed that he was open to negotiating the amount “line by line” but first the British had clearly to take responsibility for their share of EU budgets.

“I cannot imagine that a very great country like the United Kingdom is not a country that takes responsibility,” he said.

In a sign of the domestic dramas that have delayed Britain’s response, three leaders will separately see Barnier on Thursday: the first ministers of Wales, which backed Brexit, and Scotland, which did not, as well as opposition leader Jeremy Corbyn.

With May hobbled by losses in a miscued snap election last month, Corbyn’s Labour party and the devolved governments are pushing her to modify her Brexit plans – though Barnier stressed he would only be negotiating with British ministers.