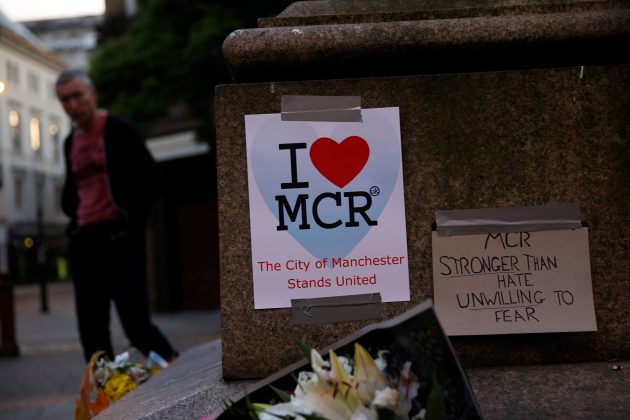 A man looks at flowers for the victims of the Manchester Arena attack in central Manchester, Britain May 23, 2017. REUTERS/Stefan Wermuth

The attack, which killed 22 people, has raised concerns in the U.S. ahead of the Memorial Day holiday weekend, when fans flock to baseball stadiums to kick off the summer.

It also comes during the playoffs for the National Hockey League (NHL) and National Basketball Association (NBA), high-profile games that typically take place before sold-out crowds.

“We already have a very thorough and detailed security plan in place at all of our arenas to ensure the safety of our fans,” said Bill Daly, deputy commissioner of the NHL.

“Obviously, with yesterday’s events, arenas have been reminded to re-double their efforts and to maximize their vigilance”

The league requests that anyone attending a game report anything that they observe as suspicious or out of the ordinary to law enforcement, security or arena personnel, he said.

An NBA official echoed that sentiment.

“We are in communication with the appropriate authorities and taking all necessary precautions to ensure the safety of our fans, teams and staff,” said Mike Bass, an NBA spokesman.

League officials typically do not share the specifics of their security measures for safety reasons.

The attacker in Manchester targeted Europe’s largest indoor arena, which was full to its 21,000 capacity, about the size of most NHL and NBA arenas.

Major League Baseball, which recently began its season and mostly plays its games in outdoor stadiums that are larger than NHL and NBA arenas, has a similar approach to fellow leagues.

“Fan safety and ballpark security are always our top priorities, and we will continue to do everything possible to provide a safe environment for our fans,” the league said in a statement to Reuters.

The National Football League, which has some stadiums that hold more than 80,000 people, is currently in its off-season.