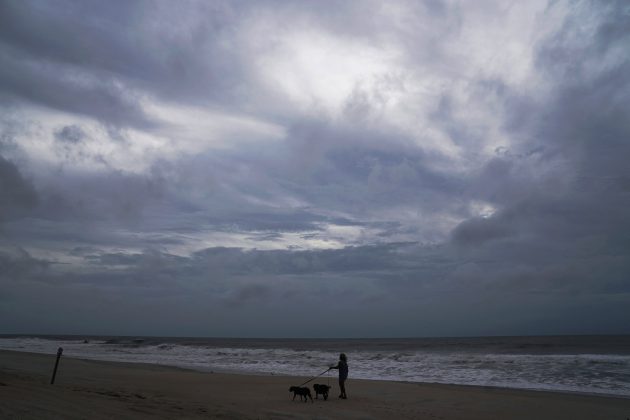 WILMINGTON, N.C. (Reuters) – Coastal North Carolina felt the first bite of Hurricane Florence on Thursday as winds began to rise, a prelude to the slow-moving tempest that forecasters warned would cause catastrophic flooding across a wide swath of the U.S. southeast.

The center of Florence, no longer classified as a major hurricane but still posing a grave threat to life and property, is expected to hit North Carolina’s southern coast Friday, then drift southwest before moving inland on Saturday, enough time to drop feet of rain, according to the National Hurricane Center.

Businesses and homes in the storm’s path were boarded up and thousands of people had moved to emergency shelters, officials said, urging anyone who remained near the coast to flee. Millions were expected to lose power, perhaps for weeks.

“There is still time to leave,” North Carolina Governor Roy Cooper told “CBS This Morning” on Thursday. “This is an extremely dangerous situation.”

Florence’s maximum sustained winds were clocked on Thursday at 110 miles per hour (175 kph) after it was downgraded to a Category 2 on the five-step Saffir-Simpson scale, according to the NHC. The storm was about 170 miles (275 km) east of Wilmington, North Carolina.

Tropical storm-force winds of at least 39 miles per hour (63 kph) extended outward up to 195 miles (315 km) from its center and were due to begin raking North Carolina’s Outer Banks barrier islands around 8 a.m. (1200 GMT) before stretching over low-lying areas reaching from Georgia north into Virginia.

The rain posed a greater danger, forecasters warned, with some spots getting as much as 40 inches (1 m) of precipitation, enough to cause devastating flash floods miles from the coast.

In all, an estimated 10 million people live in areas expected to be placed under a hurricane or storm advisory, according to the U.S. Weather Prediction Center. More than one million people had been ordered to evacuate the coastlines of the Carolinas and Virginia.

Besides inundating the coast with wind-driven storm surges of seawater as high as 13 feet (four meters) along the Carolina coast, Florence could dump 20 to 30 inches (51-76 cm) of rain over much of the region.

If it stalls over land, downpours and flooding would be especially severe. Heavy rains were forecast to extend into the Appalachians, affecting parts of Alabama, Tennessee, Kentucky and West Virginia.

The storm will be a test of President Donald Trump’s administration less than two months before elections that will determine control of Congress. After facing severe criticism for its handling of last year’s Hurricane Maria, which killed some 3,000 people in Puerto Rico, Trump has vowed a vigorous response.

“We are completely ready for hurricane Florence, as the storm gets even larger and more powerful. Be careful!” Trump said on Twitter.

The head of the Federal Emergency Management Agency, which is in charge of disaster response, has come under investigation over his use of government vehicles, Politico reported on Thursday.

Emergency declarations were in force in North and South Carolina, Virginia, Maryland and the District of Columbia.

Some in Wilmington could not resist getting one last look at their downtown before the storm hit.

“We just thought we’d go out while we still can,” said Amy Baxter, on a walk near the city’s waterfront with her husband, two sons, and dog.

Baxter, a 46-year-old homemaker, and her family plan to ride out Florence at home with board games and playing cards.