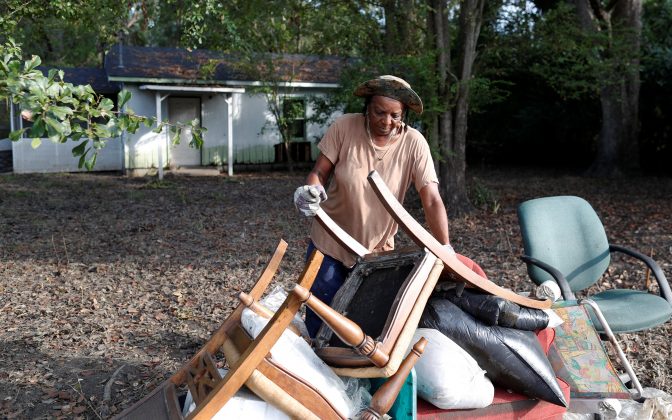 Katrina Bullock, who is still in the process of rebuilding after floods from Hurricane Matthew in 2016, stacks debris in front of her home after flooding due to Hurricane Florence receded in Fair Bluff, North Carolina, U.S. September 29, 2018. REUTERS/Randall Hill

FAIR BLUFF, N.C. (Reuters) – The childhood home Katrina Bullock returned to in the rural North Carolina community of Fair Bluff about 16 years ago to care for her sick mother was devastated by flooding from Hurricane Matthew in 2016.

A new roof went up after that. Walls saturated with muddy floodwaters were being replaced and things were looking up until a new storm, Hurricane Florence struck about 23 months later in September. 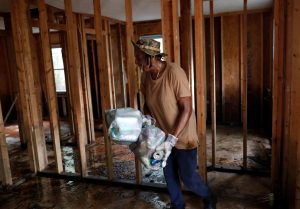 Katrina Bullock, who is still in the process of rebuilding after floods from Hurricane Matthew in 2016, cleans the inside of her home after flooding due to Hurricane Florence receded in Fair Bluff, North Carolina, U.S. September 29, 2018. REUTERS/Randall Hill

“We were starting to get it all back together and there comes Florence, and it takes it all again,” said Bullock.

She and other residents of Fair Bluff, and of many other communities in the southern and southeast parts of North Carolina hit by the double whammy of Matthew and Florence, are sorting through the latest wreckage, wondering if it is worth remaining.

Settlers first arrived in the area around Fair Bluff in the mid-1700s and one of the oldest buildings in Columbus County, where the town is located, is a trading post built on the banks of the Lumber River in the town, according to the local chamber of commerce. In the 19th century, railroads helped keep the economy

Experts say such hamlets and towns face permanent changes, with fewer residents, fewer businesses and fewer prospects of returning to the way things were just a generation ago. Older residents whose roots run deep and those too poor to leave will soon likely make up the bulk of the population.

Those who can will leave, but others will do their best to rebuild. 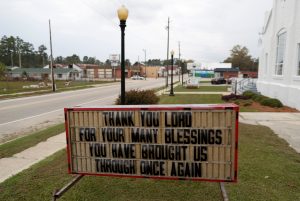 A sign in front of the Fair Bluff United Methodist Church gives a message to the community after flooding due to Hurricane Florence receded in Fair Bluff, North Carolina, U.S. September 29, 2018. REUTERS/Randall Hill

“There will be a real desire to make Fair Bluff the best it can be, but it may look and be a different thing from what it has historically been,” said Patrick Woodie, president of the NC Rural Center, an economic development organization.

Even before Florence hit, many small towns in North Carolina were struggling due to a decline in agriculture and manufacturing. Poverty rates in the state are higher now than in the aftermath of the recession about a decade ago due to the loss of small industries such as textile and a downturn in the farming sector, according to the North Carolina Justice Center, a progressive research and advocacy organization.

Matthew led to catastrophic flooding throughout low-lying eastern North Carolina and caused billions of dollars in damage. In took 28 lives in the United States while Florence killed more than 50 and drove many rural communities into deeper despair.

Fair Bluff is a mostly agricultural community with a Main Street book-ended by two churches and nestled next to the Lumber River, a usually peaceful waterway that flooded during both Matthew and Florence.

The town’s small commercial area was struggling to get back into business after Matthew and inundated again with Florence. Many wonder if it will ever open again. 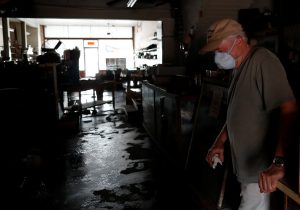 Randy Britt take a break as he works to clean one of his downtown buildings after flooding due to Hurricane Florence receded in Fair Bluff, North Carolina, U.S. September 29, 2018. REUTERS/Randall Hill

Almost all the stores on Main Street closed after Matthew and when Florence rolled in, the floodwaters brought fresh destruction to places like a furniture shop that had yet to remove all of its water-logged inventory from two years ago.

After the flooding from Florence receded, a dark muck covered floors in affected areas and a smell wafted through the air combining odors of moldy rot and a sewage plant that overflowed in the most recent storm.

Fair Bluff Mayor Billy Hammond believes the town had about 1,000 residents before Matthew and was left with about half that afterward, with many evacuees just never returning.

The permanent population now is probably about 350 to 400, most of them are people whose homes were not flooded, he said.

“It has been a ghost town for about two years,” he said in an interview. “We’re just going have to take it one day at a time and move forward and hope that people come back,” he said.

In low-lying areas near the river where some of the poorest people in Fair Bluff live, many have returned to storm-damaged homes because they do not have the money to move or rebuild.A disproportionate number of low-income people live in floodplains in river communities, according to Gavin Smith, a professor in the Department of City and Regional Planning at the University of North Carolina at Chapel Hill.

Randy Britt, 71, who has lived in Fair Bluff all his life

owns buildings on the Main Street commercial area and is working to re-open a flood-hit store.

“There is always hope. If there wasn’t hope, I wouldn’t be in Fair Bluff right now,” he said in an interview.