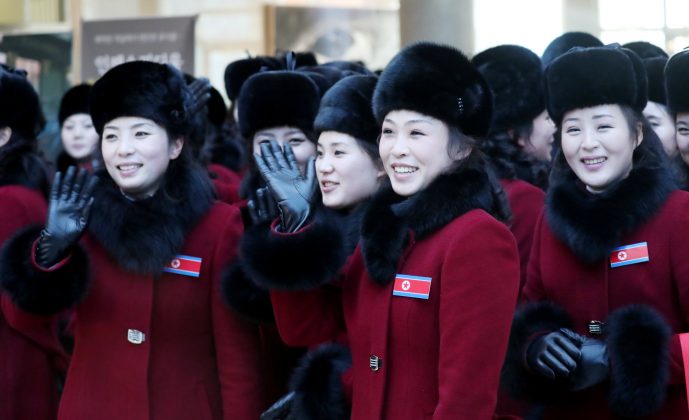 SEOUL, South Korea (Reuters) – North Korea has no intention of meeting U.S. officials during the Winter Olympics that start in South Korea on Friday, state media said, dampening hopes the Games will help resolve a tense standoff over the North’s nuclear weapons program.

However, the North’s high-ranking delegation, including the younger sister of its leader Kim Jong Un, will meet South Korean President Moon Jae-in and have lunch with him on Saturday.

Such a meeting would be the first such event between a South Korean head of state and a member of the Kim family since a 2007 summit meeting of Kim Jong Il and late South Korean president Roh Moo-hyun.

U.S. Vice President Mike Pence, who has described North Korea as the world’s most tyrannical regime, spoke with Moon on Thursday ahead of the opening ceremony in the mountain resort of Pyeongchang, just 80 km (50 miles) from the heavily armed border with the reclusive North.

Friday’s ceremony will be attended by North Korea’s delegation, including its nominal head of state, Kim Yong Nam.

Kim Yo Jong, the sister of the North’s leader, and her entourage, will travel by private jet to Seoul’s Incheon International Airport on Friday, North Korea told the South.

“We have never begged for dialogue with the U.S. nor in the future, too,” the North’s KCNA news agency said, citing Jo Yong Sam, a director-general in the North’s foreign ministry.

“Explicitly speaking, we have no intention to meet with the U.S. side during the stay in South Korea… Our delegation’s visit to South Korea is only to take part in the Olympics and hail its successful holding.”

The United States had not requested talks with North Korea, but Pence left open the possibility of some contact although his message for denuclearisation remained unchanged.

In opening remarks during his meeting with Moon, Pence said the United States would never waver in its goal of getting North Korea to give up its nuclear and ballistic missile program through strong pressure, an aim shared with South Korea.

Pence has said Washington would soon unveil “the toughest and most aggressive round of economic sanctions on North Korea ever” while South Korea wants to use the Olympics to re-engage with the North.

In Beijing, Chinese Foreign Minister Wang Yi told reporters all sides, not just the two Koreas, needed to work hard and dialogue between the United States and North Korea should be expanded for this to happen, Wang said.

“You can’t have it that one person opens the door and another closes it,” he said.

North and South Korea are technically still at war because their 1950-53 conflict ended in a truce, not a peace treaty. The North defends its weapons programmes as necessary to counter U.S. aggression. The South hosts 28,500 U.S. troops, a legacy of the war.

North Korea marked the founding anniversary of its army with a large military parade in Pyongyang on Thursday broadcast by state media, having last month changed the date of the celebration to the eve of the Olympics.

Kim Jong Un, in a black hat and matching coat, saluted troops while his wife walked beside him, television images showed. One of Kim’s close aides, Choe Ryong Hae, and Kim Yong Nam were also in attendance.

“We have destroyed the enemy’s risk-taking provocations at every move,” Kim Jong Un said in a speech. He did not mention the United States, which North Korea considers its main enemy and regularly threatens to destroy in a sea of flames.

Analysts said the parade seemed smaller than those of previous years, but was still focused on the North’s goal of strengthening its nuclear missile capabilities.

Trump has ordered Pentagon and White House officials to begin planning a military parade in Washington similar to the Bastille Day parade he saw in Paris in July, the Washington Post said.

On Friday, before he attends the Olympic opening ceremony, Pence will visit a memorial for 46 South Korean sailors killed in the 2010 sinking of a warship that Seoul blamed on a North Korean torpedo attack.

The 28-year-old sister of the North Korean leader will be the first member of the Kim family to cross the border into the South. Kim Yo Jong is a propaganda official blacklisted last year by the U.S. Treasury Department over alleged human rights abuses and censorship.

“By sending key figures like his sister, Kim Jong Un is aiming to send a signal to the South that it is giving more weight to inter-Korean ties while driving a wedge between South Korea and the United States,” said Kim Sung-han, a former South Korean vice foreign minister.

South Korea has asked the United Nations for an exemption to allow a U.N.-sanctioned North Korean official, Choe Hwi, to attend the opening ceremony with Kim Yo Jong.

Pyongyang has yet to mention any change in plans to send him, Seoul said.

The U.N. Security Council, which has slapped sanctions on North Korea for its weapons programmes, imposed a travel ban and asset freeze on Choe last year when he was vice director of the Workers’ Party of Korea Propaganda and Agitation Department.

A group of 280 North Koreans arrived in South Korea on Wednesday, made up of a 229-member cheer squad, taekwondo performers, journalists and the sports minister.

(Reporting by Hyonhee Shin and Christine Kim in SEOUL; Additional reporting by Heekyong Yang and Josh Smith in SEOUL, Ossian Shine in PYEONGCHANG, Tim Kelly and Linda Sieg in TOKYO, David Brunnstrom and Matt Spetalnick in WASHINGTON, Michelle Nichols at the UNITED NATIONS and Ben Blanchard in BEIJING; Writing by Lincoln Feast; Editing by Paul Tait and Nick Macfie)