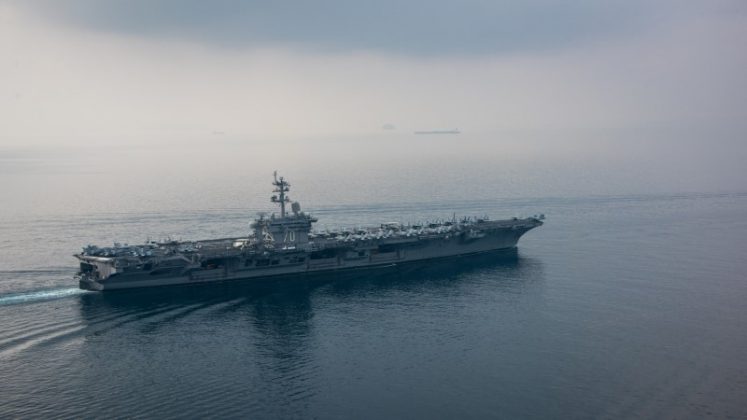 By James Pearson and Steve Holland

SEOUL/WASHINGTON (Reuters) – North Korea said on Sunday it was ready to sink a U.S. aircraft carrier to demonstrate its military might, in the latest sign of rising tension as U.S. President Donald Trump prepared to call the leaders of China and Japan.

The United States ordered the USS Carl Vinson carrier strike group to sail to waters off the Korean peninsula in response to mounting concern over the North’s nuclear and missile tests, and its threats to attack the United States and its Asian allies.

The U.S. government has not specified where the carrier strike group is as it approaches the area. U.S. Vice President Mike Pence said on Saturday it would arrive “within days,” but gave no other details.

“Our revolutionary forces are combat-ready to sink a U.S. nuclear-powered aircraft carrier with a single strike,” the Rodong Sinmun, the newspaper of the North’s ruling Workers’ Party, said in a commentary.

The paper likened the aircraft carrier to a “gross animal” and said a strike on it would be “an actual example to show our military’s force”.

The commentary was carried on page three of the newspaper, after a two-page feature about leader Kim Jong Un inspecting a pig farm.

In another sign of the intense focus on Pyongyang in Washington, the White House is expected to host U.S. senators for a top-level briefing on North Korea on Wednesday, a White House official said.

The official said the briefing would be led by Secretary of State Rex Tillerson, Defense Secretary Jim Mattis, Director of National Intelligence Dan Coats and Marine General Joseph Dunford, chairman of the Joint Chiefs of Staff.

U.S. and South Korean officials have been saying for weeks the North could soon stage another nuclear test, something the United States, China and others have warned against.

South Korea has put its forces on heightened alert.

China, North Korea’s sole major ally, opposes Pyongyang’s weapons programs and has appealed for calm. The United States has called on China to do more to help defuse the tension.

Speaking during a visit to Greece, Chinese Foreign Minister Wang Yi said there were already enough shows of force and confrontation and appealed for calm.

“We need to issue peaceful and rational sounds,” Wang said, according to a statement issued by China’s Foreign Ministry.

Adding to the tensions, North Korea detained a Korean-American man in his 50s, bringing the total number of U.S. citizens held by Pyongyang to three.

The man, Tony Kim, had been in North Korea for a month teaching accounting at the Pyongyang University of Science and Technology (PUST), the institution’s chancellor, Chan-Mo Park, told Reuters. He was arrested at Pyongyang International Airport on his way out of the country.

The arrest took place on Saturday morning local time, the university said in a statement, and was “related to an investigation into matters that are not connected in any way to PUST”.

North Korea will mark the 85th anniversary of the foundation of its Korean People’s Army on Tuesday.

It has in the past marked important anniversaries with tests of its weapons.

North Korea has conducted five nuclear tests, two of them last year, and is working to develop nuclear-tipped missiles that can reach the United States.

It has also carried out a series of ballistic missile tests in defiance of U.N. sanctions.

He has vowed to prevent the North from being able to hit the United States with a nuclear missile and has said all options are on the table, including a military strike.

North Korea says its nuclear program is for self-defense and has warned the United States of a nuclear attack in response to any aggression. It has also threatened to lay waste to South Korea and Japan.

The U.S. defense secretary said on Friday that North Korea’s recent statements were provocative but had proven to be hollow in the past and should not be trusted.

“We’ve all come to hear their words repeatedly; their word has not proven honest,” Mattis told a news conference in Tel Aviv, before the latest threat to the aircraft carrier.

Two Japanese warships, the Samidare and Ashigara, left western Japan on Friday to join the Carl Vinson and will “practice a variety of tactics” with the U.S. strike group, the Japan Maritime Self Defence Force said in a statement.

The Japanese force did not specify where the exercises were taking place, but the destroyers by Sunday could have reached an area 2,500 km (1,500 miles) south of Japan, which would be east of the Philippines.

From there, it could take three days to reach waters off the Korean peninsula. Japan’s ships would accompany the Carl Vinson north at least into the East China Sea, a source with knowledge of the plan said.

Japan’s show of naval force reflects growing concern that North Korea could strike it with nuclear or chemical warheads.

Some Japanese ruling party lawmakers are urging Abe to acquire strike weapons that could hit North Korean missile forces before any imminent attack.

Japan’s navy, which is mostly a destroyer fleet, is the second largest in Asia after China’s.

(Additional reporting by Ju-min Park in SEOUL, Tim Kelly in TOKYO and Ben Blanchard in BEIJING; Writing by James Pearson and Phil Stewart; Editing by Alexander Smith and Peter Cooney)