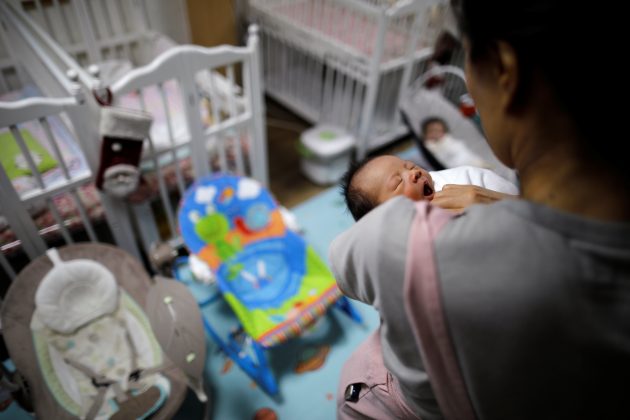 A volunteer takes care of a baby who was left in the baby box at Jusarang Community Church in Seoul, South Korea, December 18, 2018. REUTERS/Kim Hong-Ji

SEOUL (Reuters) – In just over a decade, South Korea has spent the equivalent of a small European economy trying to fix its demographic crisis, yet birthrates have dropped to the lowest in the world.

This year, President Moon Jae-In, who describes himself as a feminist president, is testing a new angle: showing women more respect.

At the end of last year, South Korea announced plans to remove some of the disincentives for employing women, allowing both parents to take parental leave at the same time and extending paid paternal leave. Employers also get incentives to allow either parent to work fewer hours.

“Efforts on gender equality are very timely,” said Shin Eun-kyung, an economist with the Organisation for Economic Co-operation and Development. South Korea is the worst place for women to work in the OECD, despite women being among the organization’s best educated, and more highly so than men.

But the measures go beyond the workplace: mothers can choose to give the baby their own last name and a tickbox on birth certificates showing whether a baby was born outside marriage will be removed.

Fertility treatments will be offered to single women and unmarried couples as well. Social campaigns will encourage men to participate more in child care and household chores.

Contrast that with a 2016 effort by the previous government, run by the country’s first woman president, Park Geun-hye, which launched a website carrying a real-time statistical heatmap of women of child-bearing age, marriages and births in the hope of spurring competition between cities and regions.

The website was taken down after one day, with women complaining it made them feel like “reproductive organs”.

“The country sees women as baby factories,” says Hong Sook-young, who produces the country’s most popular children TV show. Asked about the latest measures, Hong said “at least pretending to hear what people really want is a start toward change”.

South Korea’s demographic time bomb is ticking louder. The government’s latest forecast sees its population declining from 2027, and a presidential committee said the country’s economic growth potential could fall to below 1 percent.

Birth rates have long been a policy priority: since 2006, the government has spent 152.9 trillion won ($135.65 billion) – about the size of an economy like Hungary or Nevada – on perks for families and subsidies for children from birth through university and beyond. Last year’s 26.3 trillion low birth policy budget was more than half the defense spending of a country technically still at war with its northern neighbor.

But demographic experts say money is not the main issue: the experience of advanced countries with higher birth rates, such as France or Sweden, shows gender equality plays a crucial role.

The previous allocation of resources drew criticism as well.

Many such programs will end, with the 2019 birth-support budget cut by a quarter, to 20.5 trillion won.

“It should have been cut a long time ago,” said Jung Jae-hoon, social welfare professor at Seoul Women’s University.

Jung cautioned, however, the signal the government was finally sending will take a long time to filter through the conservative East Asian society.

Births outside marriage, for instance, are so widely frowned upon that they amount to only 1.9 percent of the total, the lowest anywhere. Experts compare that to France, where the ratio is over 50 percent and the birth rate is 1.9 versus South Korea’s 1.05. Abortion is illegal and adoption rules very strict.

The stigma of out-of-wedlock babies has seen Seoul’s Jusarang Community Church build an oven-sized “baby box”, with cushions and a heating system into its outside wall.

Last year, 261 children were abandoned across the country, according to Statistics Korea.

About 56 percent of women aged 15-64 work in South Korea, below the OECD average of almost 60 percent, and 72-75 percent in Denmark and Sweden, where birth rates are among the highest of advanced economies.

Recruiters say married young women are less likely to get job opportunities due to discrimination.

In November, the Supreme Court upheld a four-year jail sentence against a former CEO of state-run Korea Gas Safety Corp over manipulating interview scores to knock women out of the hiring process.

While Samsung Electronics has a more balanced gender ratio than Apple globally, with women accounting for 45 percent of the staff versus a third at its U.S. rival, only one in four staff at its Korea headquarters are women. None of the nine board members at Hyundai Motor Co are women, versus six out of 12 at General Motors.

“The whole period of before, during and after childbirth weighs on our career,” said a female assistant manager at Hyundai Motor. The pay gap between sexes only makes it harder, she added.

A Hyundai Motor spokeswoman said the firm was committed to providing equal opportunities to all employees and opposes discrimination. A Samsung Electronics spokeswoman said the company has been recruiting more females, including in managerial positions, and that most staff return to work after parental leave and its daycare centers can look after 3,000 children.

Still, critics say while Moon’s approach to birth rates is an improvement, his job and housing policies discourage parenthood. Minimum wage hikes have led to higher unemployment, while larger downpayment requirements have made homes unaffordable for many.

“Creating a structure that enables us to have our own house is mostly needed,” said Lee Kyoung-min, a store manager at Lotte Mart, a father of three.

Some also argue work-life balance could be better: Moon in July cut the working week to 52 hours from 68, but South Koreans still work 15 percent longer than the OECD average.

Industries catering for babies are struggling. Seoul has lost one in four maternity wards and in 2018 the capital sacked more than half its teachers.

Ryu Won-woo, manager of baby fair organizer BeFe, praised the government’s measures, especially those encouraging more responsibilities for dads. But he does not expect quick results.