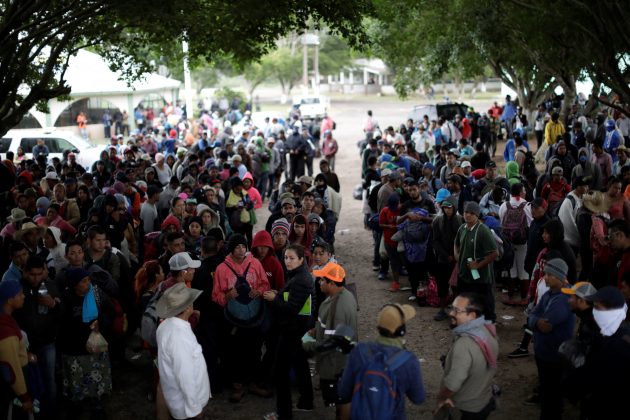 TIJUANA, Mexico (Reuters) – The arrival in the Mexican border city of Tijuana of the first few hundred travelers from migrant caravans is stretching to the limit shelters already overflowing with other people, and sparking signs of friction among the population.

Lugging heavy bundles and small children, an unprecedented caravan of thousands of mostly Honduran migrants set off for the United States in mid-October, many of them fleeing violence and poverty at home. Two other copycat groups of mainly El Salvadorans followed behind.

U.S. President Donald Trump has declared the caravans an unwelcome “invasion,” and threatened to close down the Mexico-U.S. border to keep them out, ordering some 7,000 troops to reinforce the frontier, including in Tijuana with barbed wire.

It has not stopped people trying to reach the border, including those from the caravans, others traveling from Central America independently, and Mexicans fleeing violence in cartel-plagued states.

Jose Maria Garcia, director of the Juventud 2000 migrant shelter, said he had been warning authorities since the Honduran caravan set out that migrant refuges were already operating at capacity in the border cities of Tijuana and Mexicali.

“People are still arriving, but we’re not prepared to receive them,” Garcia told Reuters. He said he believes the incoming caravans would be the largest number of migrants to arrive in the city in such a short time in recent memory.

The buildup in Tijuana will be a test of tougher asylum rules introduced by Trump, which some experts believe will push more people to try to cross illegally. Few of the 20 migrants interviewed by Reuters were aware of the new rules.

Tijuana has a history of absorbing visitors, including Chinese immigrants in the 19th century, a large American population and Haitians who settled in the city south of San Diego in 2016 after failing to cross the U.S. border.

As many as 1,000 people who broke away from the first caravan have reached Tijuana in the last few days, with a similar number expected later this week. Thousands more could soon follow as the main body of the caravans arrive.

Almost 3,000 people – many of them Mexicans – are now waiting in migrant shelters to request asylum alongside hundreds of Central Americans, said Cesar Palencia, head of the Tijuana city government’s migrant outreach team.

U.S. border officials process about 75 to 100 asylum claims a day, so it could be a month before new arrivals are seen, said Pedro Rios, of the American Friends Service Committee, a Quaker group that works with migrants.

Of the 14 migrant shelters on the 2,000-mile (3,200 km)Mexico-U.S. border, 10 are totally overcrowded, Palencia said. Dozens of arrivals from the caravan camped on the beach on Tuesday night.

“People have received us kindly, but they say there’s not enough room for everyone, so we decided to spend the night on the beach,” said a Honduran woman in Tijuana as she washed her face in a public bathroom, asking to remain anonymous.

“It was a terrible night for me and my children.”

The bulk of the group that formed after the Honduran caravan began entering Mexico over three weeks ago is now moving up the Pacific northwest coast through the state of Sinaloa, made up of between 4,000 and 5,000 people, authorities say.

The Mexican government has urged the migrants to register for asylum in Mexico, or risk deportation. The incoming government of President-elect Andres Manuel Lopez Obrador has vowed to provide jobs and visas to the Central Americans.

That message has not been popular with all Mexicans, many of whom fear for their own futures.

“We also need help,” said Olga Cruz from the western state of Michoacan, who had come to Tijuana to seek asylum in the United States with her three children.

“Not a day goes by (in Michoacan) without somebody being killed, and I don’t want my children growing up like this,” she said. “But if the government only focuses on helping (Central Americans) they leave nothing for us,” she added.

On Monday, a group of about 80 mainly LGBT people who split from the migrant caravan moved into a building in a wealthy area of Tijuana. Residents shouted at them to leave and demanded that local authorities take steps to eject them.