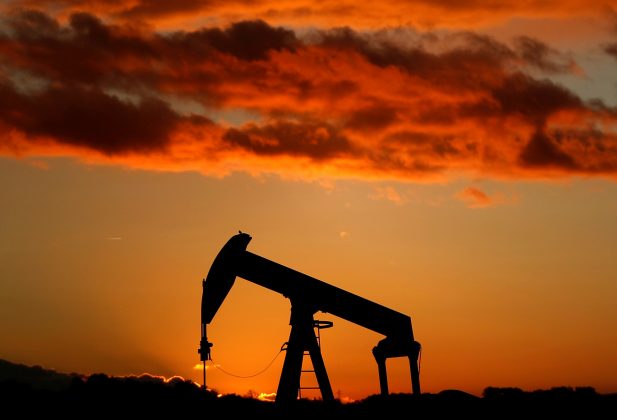 HOUSTON (Reuters) – Oil prices tumbled more than 4% on Wednesday to a seven-month low, extending recent heavy losses following a surprise build in U.S. crude stockpiles and fears that demand will shrink due to Washington’s escalating trade war with Beijing.

Oil fell early on worries about the trade war, then extended losses after U.S. government data showed a build of 2.4 million barrels in U.S. stockpiles instead of the 2.8 million draw analysts had expected. U.S. crude oil inventories are about 2% above the five-year average for this time of year.

After seven weeks of consecutive crude drawdowns, “there was a thought that today’s report would turn oil’s fortunes around,” said John Kilduff, partner at Again Capital LLC in New York. “That support got taken out of the market.”

Brent has plunged more than 12% since last week as global equity markets went into a tailspin after U.S. President Donald Trump said he would slap a 10% tariff on a further $300 billion in Chinese imports from Sept. 1.

“The market continues to trade lower on concerns about demand growth and the idea that economic growth can be impacted by the trade war,” said Gene McGillian, vice president of market research at Tradition Energy in Stamford Connecticut.

“The market isn’t concerned about anything other than how demand is going to play out through the rest of the year,” he said.

“People saw those numbers and it put a negative vibe in the market,” said Robert Yawger, director of energy futures at Mizuho in New York.

U.S. crude could fall to around the low-$40 a barrel range unless bearish sentiment changes, but U.S. oil production is still surging and the stock market is signaling rising fears of an economic downturn, said Josh Graves, senior market strategist at RJO Futures in Chicago.

“We could keep following the trend lower,” Graves said. “Crude oil inventories were disappointing and the stock market is in worrisome territory.”

Trump on Tuesday dismissed fears that the trade row with China could be drawn out further. Still, U.S. stock indexes tumbled more.

Tensions in the Middle East remained high after Iran seized a number of tankers in recent weeks in the Strait of Hormuz, a major chokepoint for oil shipments.