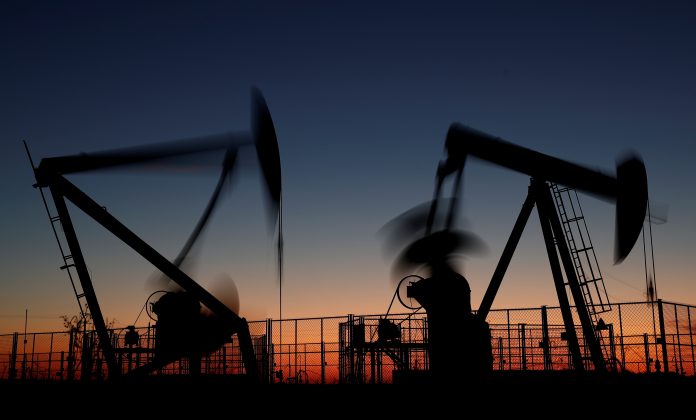 LONDON (Reuters) – Oil prices steadied on Tuesday as a resumption of production in the Gulf of Mexico after Hurricane Barry and a boom in U.S. supply from shale oil countered tensions in the Middle East.

Uncertainty about China’s economic prospects also pressured prices after data on Monday showed that growth in the country slowed to 6.2% from a year earlier, the weakest pace in at least 27 years.

U.S. oil companies on Monday began restoring some of the nearly 74% of production that was shut at platforms in the Gulf of Mexico because of Hurricane Barry.

“Crude oil is having a quiet day today after giving back some of last week’s gains,” Saxo Bank commodity strategist Ole Hansen said.

“U.S. output from the Gulf looks set to increase and … Barry failed to hit refinery assets along the coast.”

Workers were returning to the more than 280 production platforms that had been evacuated. It can take several days for full production to resume.

“You could almost hear the big sigh of relief from oil producers and refiners in the region as the storm passed without causing significant damage,” PVM analyst Tamas Varga said.

The storm will probably result in a noticeable decline in U.S. crude oil stocks this week, analysts at Commerzbank said.

Inventory data will be published by the American Petroleum Institute on Tuesday evening, and by the U.S. Department of Energy on Wednesday.

The market was also weighed down by signs of further increases in output from the United States, which has ridden a wave of shale oil production to become the world’s biggest crude producer, ahead of Russia and Saudi Arabia.

U.S. oil output from seven major shale formations is expected to rise by about 49,000 barrels per day in August, to a record 8.55 million bpd, the U.S. Energy Information Administration said.

Market activity has started to slow as it tends to in July and August, the peak European and U.S. holiday season, Hansen said.

Tension between the United States and Iran over Tehran’s nuclear program kept the market on edge given the potential for a price spike should the situation deteriorate.

Iran’s Supreme Leader Ayatollah Ali Khamenei said on Tuesday Tehran would respond to Britain’s “piracy” over the seizure of its oil tanker in Gibraltar.