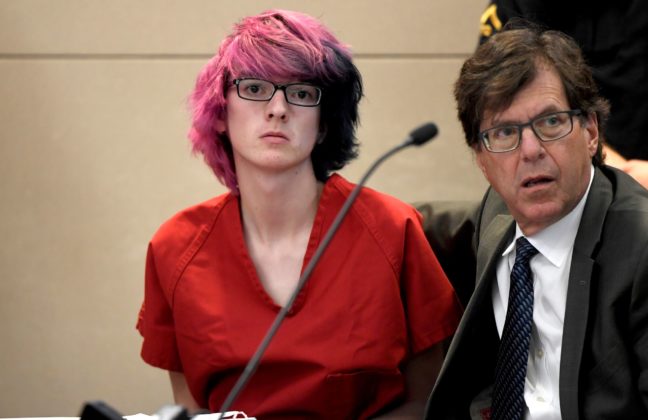 DENVER (Reuters) – The older of two Colorado teens accused of a cocaine-fueled shooting spree that killed one classmate and wounded eight others at a Denver-area charter school, pleaded not guilty on Thursday to murder and attempted murder charges, prosecutors said.

Devon Erickson, 19, jailed without bond since the May 7 rampage, entered his plea in Douglas County District Court to all 44 felony counts against him, including conspiracy, weapons offenses and theft, a spokeswoman for District Attorney George Brauchler said in a statement.

Erickson’s lawyers also gave the court notice they will pursue a “mental health defense,” and the judge ruled the defendant must cooperate with any psychiatric examination ordered in the case, spokeswoman Vikki Migoya said in an email.

The judge ruled in September there was sufficient evidence for Erickson to stand trial in the attack.

Erickson is accused along with Alec McKinney, 16, of bursting into the Science, Technology, Engineering and Math (STEM) School they attended in Highlands Ranch, south of Denver, and opening fire with guns they stole from Erickson’s parents.

The pair were arrested after several fellow students tried to fight back, including 18-year-old Kendrick Castillo, who was killed. Eight students were wounded, one of them struck by errant gunfire from a private security guard.

Police say the two suspects had used an ax and crowbar to break into a safe containing the firearms they stole – three pistols and a .22-caliber rifle – and consumed cocaine before storming the school.

According to an arrest warrant affidavit, Erickson later told police he “didn’t want anyone to get shot” but the handgun he was carrying discharged when he was hit by the other students rushing him.

McKinney, who was born female but identifies as male, is alleged to have told investigators he was bullied at school for his transgender status and planned the attack out of revenge, enlisting Erickson to help him carry out the plot.

If convicted of first-degree murder, Erickson faces a life sentence without the possibility of parole, or the death penalty should prosecutors seek capital punishment.

McKinney, although charged as an adult, would face a maximum punishment of 40 years in prison because he was a juvenile when the crime was committed.

The attack occurred less than a month after the 20th anniversary of the Columbine High School massacre in nearby Littleton, Colorado, where two students shot and killed 13 people before committing suicide.

(Reporting by Keith Coffman in Denver; Editing by Steve Gorman and Tom Brown)