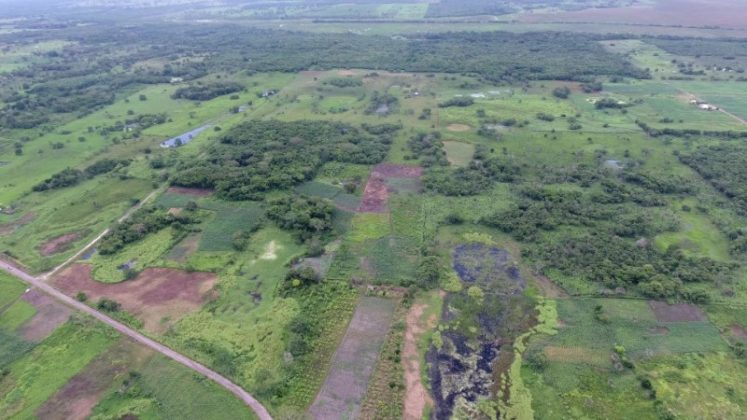 An aerial view of the ancient Maya Aguada Fenix site in Mexico's Tabasco state, with causeways and reservoirs in the front and the Main Plateau in the back, is seen in this image released on June 3, 2020. Takeshi Inomata/Handout via REUTERS ATTENTION EDITORS - NO RESALES. NO ARCHIVES THIS IMAGE HAS BEEN SUPPLIED BY A THIRD PARTY.

WASHINGTON (Reuters) – Scientists using an aerial remote-sensing method have discovered the largest and oldest-known structure built by the ancient Maya civilization – a colossal rectangular elevated platform built between 1,000 and 800 BC in Mexico’s Tabasco state.

The structure, unlike the soaring Maya pyramids at cities like Tikal in Guatemala and Palenque in Mexico erected some 1,500 years later, was not built of stone but rather of clay and earth, and likely was used for mass rituals, researchers said on Wednesday.

Located at a site called Aguada Fenix near the Guatemalan border, the structure measured nearly a quarter mile (400 meters) wide and nine-tenths of a mile (1,400 meters) long and stood 33 to 50 feet (10 to 15 meters) high. In total volume, it exceeded ancient Egypt’s Great Pyramid of Giza built 1,500 years earlier.

There were no signs of sculptures depicting high-status individuals, suggesting Maya culture at this early stage was more communal and only later developed social inequality and a hierarchical society led by royalty, the researchers said.

“Because it is so large horizontally if you walk on it, it just looks like natural landscape,” said University of Arizona archaeologist Takeshi Inomata, who led the research published in the journal Nature. “But its form comes out nicely in lidar.”

Lidar, short for Light Detection and Ranging, is a remote-sensing technique that employs a pulsed laser and other data obtained flying over a site to generate three-dimensional information about the shape of surface characteristics.

Nine large causeways and a series of reservoirs were linked to the structure. Some parts of the rural Aguada Fenix site today are covered with cattle ranches. Other parts are wooded.

“It is probable that many people from surrounding areas gathered for special occasions, possibly tied to calendrical cycles,” Inomata said. “The rituals probably involved processions along the causeways and within the rectangular plaza. The people also deposited symbolic objects such as jade axes in the center of the plateau.”