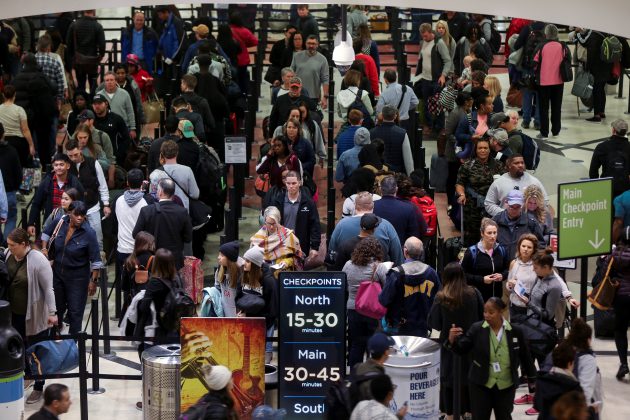 WASHINGTON (Reuters) – As the partial U.S. government shutdown hit the four-week mark on Friday, tensions mounted in Washington on either side of the standoff over President Donald Trump’s demand for $5.7 billion to help fund a U.S.-Mexico border wall.

That ultimatum, which congressional Democrats have rejected, has prevented Congress from approving legislation to restore funding to about a quarter of the federal government, which closed down partially on Dec. 22 when several agencies’ funds expired for reasons unrelated to the border.

The Democratic-led House of Representatives has left town for a three-day weekend, returning late on Tuesday. The Senate was expected to reconvene on Friday, but its exact plans were unsettled.

The Republican-controlled Senate, toeing Trump’s line on the wall, has not acted on any of several shutdown-ending bills approved in recent days by the House, all lacking wall funding.

The partial shutdown – already the longest in U.S. history – seemed certain to drag well into next week, meaning 800,000 federal workers nationwide would continue to go unpaid and some government functions would remain impaired.

Any serious debate about immigration policy has deteriorated into a test of political power. After House Speaker Nancy Pelosi suggested to Trump that he delay the annual State of the Union address until after the government reopens, Trump responded by denying Pelosi and a congressional delegation use of a military aircraft for a planned trip to Belgium and Afghanistan.

Trump’s intervention stopped the trip just as Pelosi and other lawmakers were about to travel.

Pelosi’s spokesman said on Friday that the congressional delegation had been prepared to fly commercially after the military plane was revoked, but learned the administration had also leaked the commercial travel plans.

“In light of the grave threats caused by the President&rsquo;s action, the delegation has decided to postpone the trip so as not to further endanger our troops and security personnel, or the other travelers on the flights,” Drew Hammill wrote on Twitter.

Hammill said the State Department had to pay for the commercial flight, which was how the White House knew about the travel plans that Hammill said were leaked.

A White House official, speaking on condition of anonymity, denied leaking the travel plans, adding, “When the speaker of the House and about 20 others from Capitol Hill decide to book their own commercial flights to Afghanistan, the world is going to find out.”

In tweets on Friday, Trump reiterated his claim that farmworkers would still be able to enter the country and stressed again his demand for the border wall, which he says is needed to stem illegal immigration and drug trafficking. Democrats have resisted the wall as wasteful and unworkable.

The House has passed short-term spending bills that would end the shutdown and reopen the government, but Republican Senate Majority Leader Mitch McConnell has refused to allow a floor vote on them, saying they lacked White House support.

A House Republican aide told Reuters on Thursday that no back-channel talks to resolve the shutdown were taking place.

During the week, a small group of Senate Republicans sought support for a plan to urge Trump to agree to a short-term funding bill in exchange for a debate on border security. Their efforts went nowhere.

The Trump administration worked to minimize the damage being done to government operations across the country. On Thursday, the State Department said it was calling furloughed employees back to work.