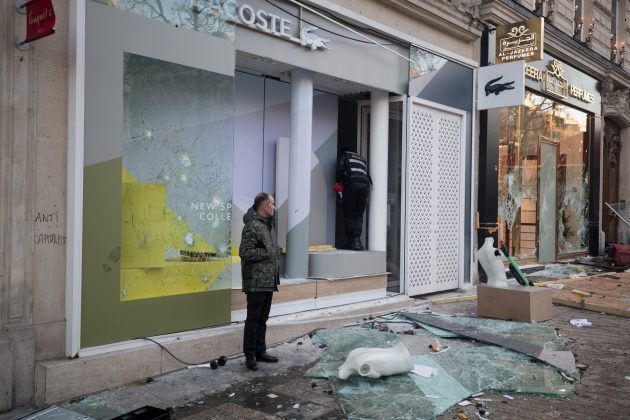 A man stand in front of a damaged shop on the Champs Elysees avenue during a demonstration by the "yellow vests" movement in Paris, France, March 16, 2019. Picture taken March 16, 2019. REUTERS/Philippe Wojazer

PARIS (Reuters) – It is meant to be one of the world’s most elegant streets: more than a kilometer of boutiques, restaurants, sidewalk cafes and fashion outlets vying for tourists’ attention. But on Monday, the Champs Elysees looked more like a construction site.

Whether the Disney store or Samsung, Tissot, Zara or Dior, few major retailers were left untouched by the rampage, which also took in a cinema, Hugo Boss, a Renault branded cafe, an Iran Air office and banks from Societe Generale to HSBC.

Among those that did emerge unscathed, perhaps thanks to heavy boarding-up after previous bouts of vandalism, were Apple’s flagship store, Tiffany &amp; Co. and Louis Vuitton.

Carpenters were cutting wood to board up shattered windows on Monday morning, and glass panes were being replaced in some bus-stops and storefronts, but stretches of the wide avenue remained a mess, with the smell of charred paper and metal hanging over the incinerated carcasses of newspaper kiosks.

“It’s a bit of a mess,” said Michael Bilaniuk, a tourist from Ontario, Canada who said he had come straight to the Champs Elysees to check out the scene after arriving in France, aware that the Gilets Jaunes had been on the rampage.

“It’s almost part of the tourist attraction — we’ve heard and seen so much about the protests, you kind of want to come and see for yourself what’s happened. It’s interesting.”

Nearby, protesters’ slogans were written across a storefront and the elegant entranceway to a gallery of shops.

“They have millions, we are the millions” read one. Another threatened: “We are a legion, you are pawns, be careful.”

Since the ‘yellow vest’ movement began in November, originally as a protest against fuel taxes before morphing into a general denunciation of Macron’s politics, the government has struggled to neutralize the threat.

While there has been a protest every Saturday in Paris and other cities since November, not all of them have been as violent and destructive as Saturday’s, which has made it hard for businesses to predict how to prepare.

While some retailers began boarding up their shops after rioting in early December, in recent weeks the numbers joining the protests declined sharply and many store owners may have thought it was safe to operate normally again.

France’s overall retail sales were affected at the end of 2018 because of nationwide disruption in the run-up to Christmas, and after Saturday’s vandalism, Paris’ Chamber of Commerce called for action from the government.

“Employers and their staff have been traumatized by the intensity and repetition of the violence,” the chamber said in a statement on Monday, pointing out that more than 90 businesses had been affected.

“Last Saturday’s demonstrations have taken things too far,” it said, demanding that the government take “firm measures that will allow retailers to go about their business normally”.

One thought on “On Paris’ Champs Elysees, shattered glass and smoking ruins”