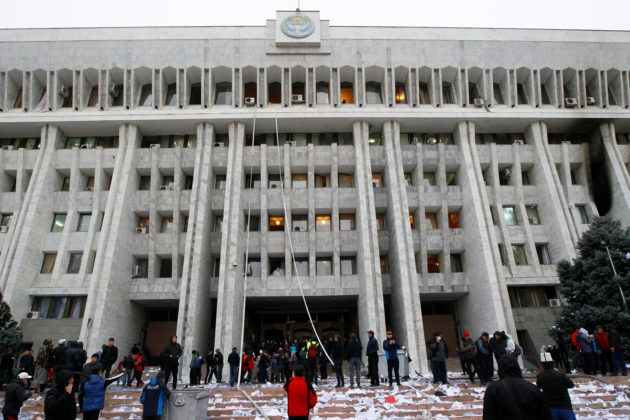 People protesting against the results of a parliamentary election stand in front of the government headquarters which has been taken over in Bishkek, Kyrgyzstan, October 6, 2020. REUTERS/Vladimir Pirogov

By Olga Dzyubenko and Vladimir Pirogov

BISHKEK (Reuters) – Opposition groups said they had seized power in Kyrgyzstan on Tuesday after taking control of government buildings during post-election protests in the strategically important Central Asian state.

President Sooronbai Jeenbekov said his country, a close ally of Russia, was facing an attempted coup d’etat. Two presidents have been toppled by revolts in Kyrgyzstan in the past 15 years.

Jeenbekov called for calm and ordered security forces not to open fire on protesters after overnight unrest in which the government said one person was killed and 590 wounded. Officials said that Sunday’s parliamentary election would be rerun, but it was not clear who would organize it or govern until then.

Burnt out cars littered Bishkek, the capital, after protesters stormed the main government building, known as the White House, which briefly caught fire before emergency services put out the blaze.

Debris from inside, including government papers, and office furniture, was strewn outside after protesters ransacked parts of it.

Kyrgyzstan, which borders China, has long been a platform for geopolitical competition between Moscow, Washington and Beijing. It houses a Russian military base and its leaders and main opposition groups have traditionally backed close ties with Russia.

On Tuesday, however, unidentified intruders torched a Russian-operated factory at the country’s second-largest gold deposit in Kyrgyzstan, Jeruy, fording its owners to suspend development of the site.

Protesters also showed up at smaller mines developed by Chinese and Turkish companies and demanded that they halt operations, according to local news website Akipress. It was not clear if the companies complied.

Canada’s Centerra Gold, which operates the country’s biggest gold deposit, said it was monitoring political events but that its operations were continuing uninterrupted.

The opposition said it had set up a coordination council and was discussing the line-up of a provisional government. “The leaders of parties that took part in the election have assumed responsibility for restoring public order,” the council said.

Opposition groups also freed Almazbek Atambayev, a former president jailed on corruption charges after falling out with Jeenbekov. Atambayev was not named to any role, however, and Jeenbekov showed no immediate signs of relinquishing power.

The cabinet, housed in a building separate from the White House, said it continued to function although Prime Minister Kubatbek Boronov has not appeared since the unrest began.

The central election commission said it had annulled the results of the election and parliament would hold an emergency meeting on Wednesday. Several opposition politicians urged lawmakers to install a provisional cabinet to legitimize a transfer of power.

Interior Minister Kashkar Junushaliyev did not show up for work on Tuesday, a ministry spokesman said, saying that Kursan Asanov, an opposition politician and a former senior security official, had taken over as acting interior minister.

Police had been ordered to ensure citizens’ safety and prevent clashes and looting, the same spokesman said.

The Russian embassy to Kyrgyzstan said it supported resolving the situation in the country through legal means while ensuring stability and people’s safety.

Trouble erupted on Monday after police used teargas and water cannon to disperse thousands of people demanding the results of the parliamentary election be annulled.

Western observers said the election, which appeared to have handed most seats to two establishment parties supporting closer links between the former Soviet republic and Russia, had been marred by vote buying.

One of the parties was close to Jeenbekov, the president.

As well as storming the White House, which houses both the president and parliament, protesters took over several other buildings, including the mayor’s office.

They appointed their own acting head of national security, acting prosecutor general and a commandant of Bishkek, although there were no indications of how much power they wielded.

Jeenbekov’s supporters were gathering in the southern city of Osh, the same reports said, where his brother Asylbek Jeenbekov called for unity and order.