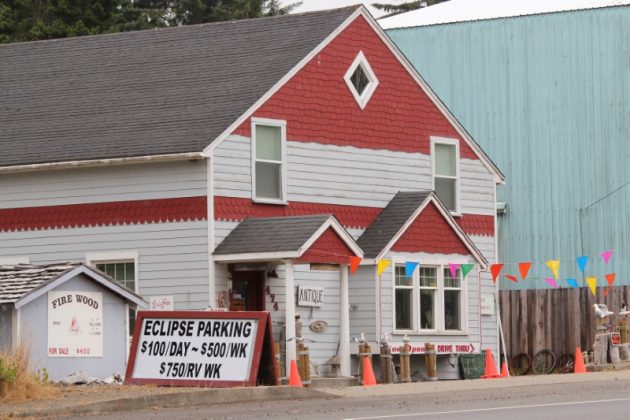 DEPOE BAY, Ore. (Reuters) – Oregon’s Depoe Bay is preparing for the first total eclipse to traverse the continental United States in a century as if a natural disaster was bearing down on the small coastal city.

The town, home to 1,500 residents and a single traffic light, is near the spot of land where the total eclipse will first appear on Aug. 21 as it begins cutting a path through 14 states to the Atlantic.

That distinction has raised fears that a tidal wave of visitors will descend on Depoe Bay to get a first glimpse at “totality” a week from Monday.

“Totality” is when the moon passes in front of the sun, blotting out its light and exposing the glowing “corona” around its perimeter. After a little more than two minutes, the phenomenon will end in any given location as the eclipse moves to the east on its coast-to-coast journey.

“We’re a double ground zero,” said Pat O’Connell, who owns a small gallery and gift store facing the rocky sea wall, where thousands are expected to gather when the sky darkens and the eclipse comes in to view.

“This community has been practicing for a major catastrophe for years and years, and a lot of the eclipse preparations in some ways mirror those disaster preparations,” she said. “We’ve been doing what we’re used to doing and hopefully we are all prepared.”

One of the major challenges, Leff says, is anticipating how many people will show up.

The spectacle is the first in 99 years to span the entire continental United States, the world’s third most populous nation. It will also be the first total solar eclipse visible from any of the lower 48 states since 1979.

The city’s handful of hotels and campgrounds have been sold out for months and crowd estimates range from thousands to hundreds of thousands.

The city held its first eclipse meeting four years ago at its tiny two-room City Hall, a former wooden schoolhouse.

Since serious planning began eight months ago, the city has rented portable restrooms, bought a hundred additional garbage cans, and ordered thousands of protective glasses to be distributed free at the local fire station.

It also has handed out leaflets advising residents to stock up on food, medicine, cash and gas, and prepare for traffic gridlock.

The only way into and out of Depoe Bay is Highway 101, which has only one lane in each direction in the area. Even a minor traffic accident can completely stop traffic, said Depoe Bay Fire Chief Joshua Williams.

“Our worst case scenario is everybody on the road, stopping, parking on side of roads and not having enough access for a fire engine or an ambulance to get down the road to somebody’s emergency,” Williams said.

Normally, only one fire station in the area is staffed, but for the four days surrounding the eclipse, firefighters will staff three stations. Williams says he is working with state authorities to keep traffic lanes clear for emergency vehicles.

And it’s not just congestion on the roads the city has to worry about. With what it calls “the world’s smallest harbor,” Depoe Bay is also preparing for hundreds of boaters trying to use the town’s lone boat launch.

The Coast Guard will monitor boating traffic and will have a vessel stationed at the entrance to the harbor, Coast Guard spokesman Andrew Port said. Guardsmen will board boats to make sure boaters are prepared.

At Dockside Charters, Loren Goddard has rented out most of his boats for fishing trips, but there’s still space on a three-hour cruise for visitors with $1,000 hankering to see the eclipse from the ocean.

“You’re first on the scene. It’s going to happen there before it makes landfall,” said Goddard, who plans to be 30 miles offshore fishing for tuna when the time comes.