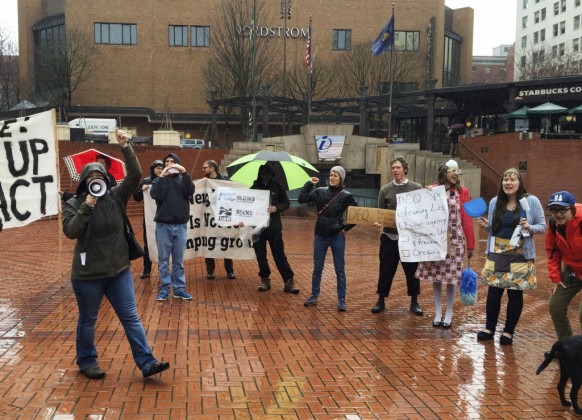 PORTLAND, Ore. (Reuters) – Oregon officials this week will release test results on soil from neighborhoods near two Portland glass factories accused of spewing toxic metals into the air for years, a revelation that has led to a class-action suit and demands for more oversight.

The results of the testing could heighten suspicions from residents and environmental advocates that emissions of arsenic and cadmium from the two plants exposed residents to much higher levels of the heavy metals than have been told.

There is already ample evidence from tests conducted by the U.S. Forest Service of airborne contamination near the factories, as well as signs that the metals may have settled into the soil.

The Forest Service tests, conducted on moss growing on trees near one of the factories, found levels of arsenic 150 times higher and cadmium 50 times higher than Oregon safety benchmarks. Near the second factory, cadmium levels were found to be similarly elevated.

Long-term arsenic exposure is linked to skin cancer and cancers of the lung, bladder, and liver as well as skin color changes and nerve damage, according to information posted on the Oregon Health Authority website. Long-term cadmium exposure is linked to lung and prostate cancer, as well as kidney disease and fragile bones, according to the site.

The state has not received any reports of people being treated or hospitalized as a result of exposure to the metals released in emissions by the glass companies, according to Jonathan Modie, a spokesman for the Oregon Health Authority.

U.S. Senator Ron Wyden of Oregon, who lives near one of the hot spots, describes the situation in the state’s largest city as a public health emergency. He told Reuters on Friday that he had asked the Centers for Disease Control and the Environmental Protection Agency to provide “experts on the ground” when the soil tests are released to “help us get at the core facts.”

This comes after revelations in Flint, Michigan, that a switch in the city’s water source to save money corroded its aging pipes and released lead and other toxins into its drinking water. That crisis has emerged as a rallying point for Democrats as the U.S. presidential election approaches.

Even if the soil tests in Portland show low levels of the heavy metals, residents who live near the factories fear the exposure may be more widespread, extending beyond the hot spots that are being tested.

“This is just the tip of the iceberg,” said Kerry Ryan, a Portland resident who lives five blocks from one of the factories.

Ryan, who now has an 11-month-old daughter whom she is breastfeeding, said she is arranging to have herself tested for exposure to the metals.

According to the Oregon Health Authority’s website Q&A, arsenic and cadmium can be found in breast milk and may contribute to low birth weight.

Last month, Oregon public health officials advised residents to stop eating vegetables grown in gardens within a half mile of the so-called pollution “hot spots,” or areas where the pollution appears to be concentrated.

On Thursday, about 50 residents mounted a protest in downtown Portland, chanting “clean air now” and delivering boxes of rotting produce harvested from their gardens to the state’s environmental quality offices.

Arsenic and cadmium contamination, confirmed by the Oregon Department of Environmental Quality, occurred near Bullseye Glass, located in a middle-class neighborhood near public schools and a city park.

Cadmium contamination was confirmed near Uroboros Glass, located in an industrial section of a residential neighborhood near the Willamette River.

Both plants have voluntarily halted the use of the metals, used to create color for stained glass, according to the state’s Department of Environmental Quality, which is conducting the soil tests that are set for release this week at the request of Gov. Kate Brown

Bullseye was in compliance with state regulations under a loophole that Wyden called “the size of a lunar crater” during a press conference in February.

According to the Portland Oregonian newspaper, the firm Weitz & Luxenberg is also meeting with area residents. The firm is currently working with environmental activist Erin Brockovich to seek redress for residents whose health may have been harmed by a massive natural gas leak in Southern California.