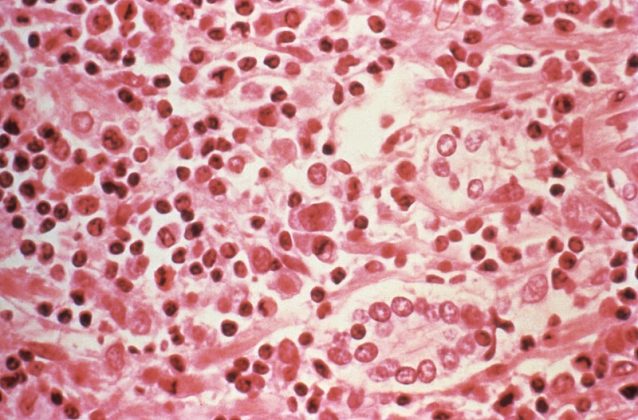 A micrographic study of liver tissue seen from a Hantavirus pulmonary syndrome (HPS) patient seen in this undated photo obtained by Reuters, July 6, 2017. Centers for Disease Control and Prevention/Handout via REUTERS

(Reuters) – Five people have been stricken with the rare, rodent-borne hantavirus illness in Washington state since February, three of whom have died, in the state’s worst outbreak of the disease in at least 18 years, public health officials reported on Thursday.

The three fatal cases also mark the highest death toll from hantavirus pulmonary syndrome in Washington state during a single year since the respiratory ailment was first identified in the “Four Corners” region of the U.S. Southwest in 1993.

The disease has been found to be transmitted to humans from deer mice, either through contact with urine, droppings, saliva or nesting materials of infected rodents or by inhaling dust contaminated with the virus.

Victims in the latest outbreak were men and women ranging in age from their 20s to their 50s from four counties across the state, said David Johnson, spokesman for the Washington State Department of Health.

The first diagnosed case this year was in February and the most recent was last month, when the infection killed a resident of Spokane County in the eastern part of the state near Washington’s border with Idaho. Three of the five cases, including another one that proved fatal, were confirmed in the Puget Sound region of King and Skagit counties.

The only common factor among those infected by the disease, which typically kills more than a third of its victims, is that they were all exposed to infected mice, Johnson said.

The last time five confirmed hantavirus cases were diagnosed in Washington state in a single year was in 1999, although just one of those proved fatal, Johnson said.

Washington has reported 49 of the 690 hantavirus cases tallied nationwide from 1993 to January 2016, ranking fifth among 10 Western states that account for the bulk of all documented infections, according to the federal Centers for Disease Control and Prevention (CDC) in Atlanta.

Eighteen infections with four deaths were reported nationally in 2015. The year before, the CDC counted 35 cases, of which 14 were fatal.

The most highly publicized hantavirus outbreak occurred in 2012, when 10 visitors to Yosemite National Park in California were diagnosed with the infection, three of whom died, prompting a worldwide alert. All but one of those were linked to tent cabins later found to have been infested by deer mice.