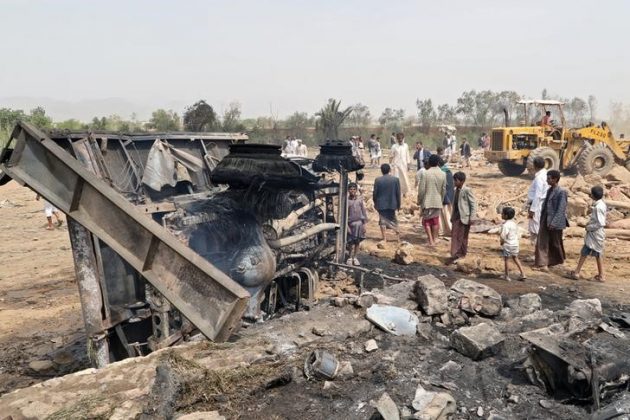 People gather at the site of a Saudi-led air strike on an outskirt of the northwestern city of Saada, Yemen August 4, 2017. REUTERS/Naif Rahma

DUBAI (Reuters) – Yemen suffered more airstrikes in the first half of this year than in the whole of 2016, increasing the number of civilian deaths and forcing more people to flee their homes, according to a report by international aid agencies.

The pace of clashes on the ground has also intensified this year, especially around Yemen’s third largest city, Taiz, which is besieged by the Iran-aligned Houthis, said the report.

The number of airstrikes in the first six months of 2017 totaled 5,676, according to the report by the Protection Cluster in Yemen, which is led by the United Nations High Commission for Refugees (UNHCR), up from 3,936 for all 2016.

Average monthly clashes between the warring sides have increased by 56 percent from last year, the figures also showed.

“(We are concerned by) the increasing impact on the civilian population, particularly in terms of civilian casualties, fresh displacement and deteriorating conditions,” said Shabia Mantoo, UNHCR spokesperson for Yemen.

The conflict shows no sign of ending and U.N.-sponsored peace efforts remain deadlocked.

The report did not identify any party as being responsible for the airstrikes, but the Saudi-led coalition backing Hadi has controlled Yemeni airspace since the war began in March 2015.

A coalition spokesman declined to comment on the report.

Most clashes and air strikes have been concentrated in frontline provinces, including Taiz, Saada, Hajjah, Sanaa, al-Jawf and Marib, the report said.

Figures released in a periodic update issued in August by the Office for the Coordination of Humanitarian Affairs (OCHA), with input from other aid agencies in Yemen, estimated the civilian death toll as of April 2017 at 8,053, with more than 45,000 injured, but the real figures could be much higher.

“(The figures are considered) to significantly undercount the true extent of the casualties, considering the diminished reporting capacity at health facilities and people’s difficulties accessing healthcare,” the OCHA said.

The war has destroyed much Yemeni infrastructure, including the main Hodeidah port, as well as hospitals, schools and roads, pushing the country to the verge of famine and causing a cholera epidemic that has killed some 2,000 people since April.

The number of displaced people stands at two million, while 946,000 people are internally displaced returnees, so more than 10 percent of Yemen’s 27 million population are either displaced or facing the immediate challenges of return, the OCHA said.