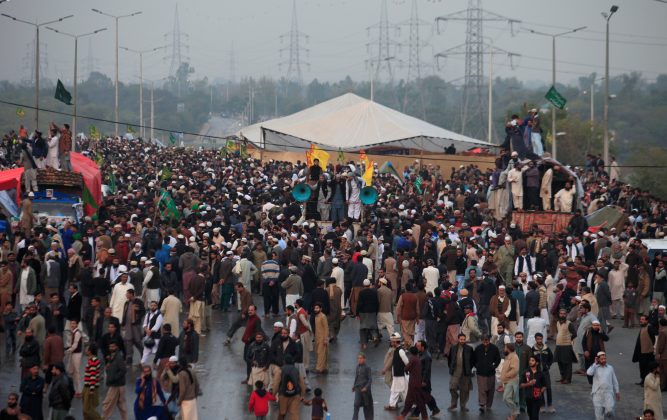 Members of the Tehreek-e-Labaik Pakistan, an Islamist political party, gather during a sit-in in Rawalpindi, Pakistan November 17, 2017. REUTERS/Faisal Mahmood

ISLAMABAD (Reuters) – Pakistan’s government on Friday issued a final warning to members of a hard-line Islamist party who have blocked a main road into the capital since last week, raising fears of a violent clash as they refuse to budge.

Hundreds of supporters of the Tehreek-e-Labaik Pakistan party have been blocked the road to Islamabad for nearly 10 days, demanding that the minister of law be sacked for what they term blasphemy.

“You all are being given a last warning,” the Islamabad deputy commissioner said in the order.

A court had already ordered the party to end the protest, the order added. “After this final announcement, you all are being warned to end the illegal sit in immediately.”

Tehreek-e-Labaik blames the minister, Zahid Hamid, for changes to an electoral oath that it says amounts to blasphemy. The government puts the issue down to a clerical error.

Pakistan’s blasphemy law has become a lightning rod for Islamists, especially since 2011 when the liberal governor of Punjab province, Salman Taseer, was murdered by a bodyguard for questioning the law that mandates the death penalty for insulting Islam or the Prophet Mohammad.

A spokesman for the Labaik party, Ejaz Ashrafi, refused to comply with the order.

“We’re not moving,” he told Reuters by phone form the sit-in.

A government official, Khalid Abbasi, said the protesters had set up pickets along the route they are occupying manned by party members carrying iron rods and sticks.

Since they got the warning, he said, hundreds of more party workers have joined the sit-in.

Fearing violence, the government has blocked several roads with shipping containers to corral the protesters, but that has caused hours-long traffic jams in and around the capital.

In 2007, a confrontation between authorities and supporters of radical preachers at an Islamabad mosque led to the death of more than 100 people.

“All resources can be used to break this sit-in,” the deputy commissioner’s warning said.