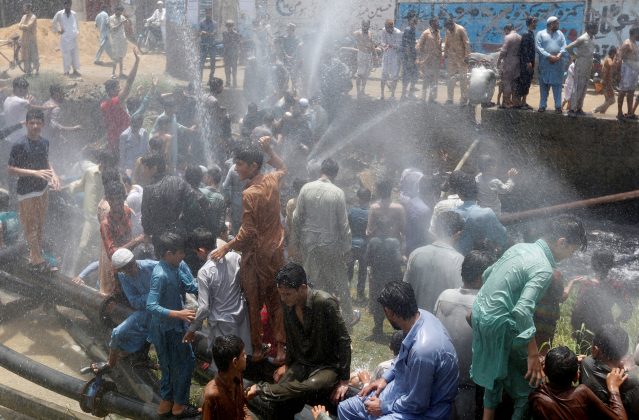 People cool off with water from water lines after they punctured them in protest against the power outages in their area in Karachi, Pakistan May 30, 2017. REUTERS/Akhtar Soomro

KARACHI/PESHAWAR, Pakistan (Reuters) – Protesters in Pakistan’s largest city set tires ablaze on Tuesday after power cuts disrupted a traditional pre-dawn meal during the holy month of Ramadan, police said, a day after two protesters in another city were shot dead.

Higher power generation has helped ease load shedding in many areas in recent months, but technical breakdowns in the past week have boosted the frequency and length of blackouts, sparking anger during the blistering late summer months.

Protests erupted on Tuesday in the southern port city of Karachi after electricity was cut during the pre-dawn feast Muslims hold before they begin fasting from daybreak to sunset.

Some protesters tried to attack and set fire to an office of the city’s main power provider, K-Electric, said police officer Khadim Ali.

A transmission line had tripped due to high humidity, K-Electric said on social network Twitter, adding that the load shedding would persist for two to three weeks more. It is now back to eight to 10 hours a day in some parts of Karachi.

“This is the atrocity the federal government is doing with us,” Shah told reporters in Karachi, the provincial capital.

Sharif called an emergency meeting of a cabinet energy panel on Tuesday to discuss the power outages.

In a statement, the prime minister’s office said the meeting focused on “urgent measures” to reduce power cuts during Ramadan, which coincides this year with summer temperatures forecast in some regions at around 40 degrees Celsius (104°F).

On Monday, two demonstrators were killed in another protest against electricity shortages in the northwestern province of Khyber Pakhtunkhwa, reportedly when police fired to disperse crowds.

One of those killed was shot by police and later died in hospital in the Malakand district, said Humayun Khan, the provincial representative of the PPP.

Both deaths were being investigated, said the district’s deputy commissioner, Zafa Ali Shah.