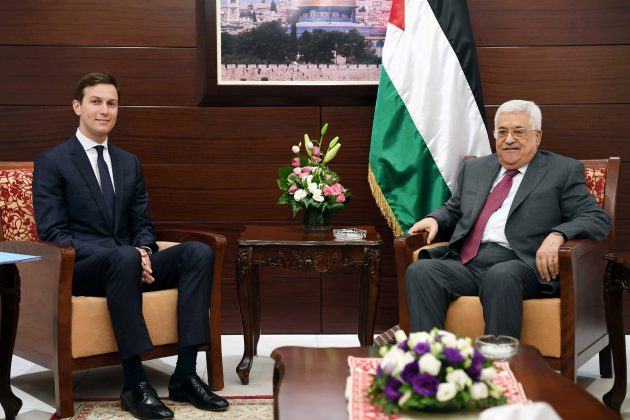 BEIRUT (Reuters) – The U.S. blueprint to end the conflict between Israel and the Palestinians, still in draft form after almost two years, is seen by Palestinians, and by some Arab officials and politicians, as a plan to finish off the Palestinian cause.

The initiative, driven by Jared Kushner, Donald Trump’s son-in-law and White House adviser, was billed by the U.S. president as the “deal of the century”.

While its precise outlines have yet to be revealed, Palestinian and Arab sources who have been briefed on the draft plan say Kushner has jettisoned the two-state solution – the long-standing U.S. and international formula that envisages an independent Palestinian state alongside Israel in the West Bank, east Jerusalem and Gaza.

After several postponements, Washington plans a first formal outing of the economic components of the plan at a “Peace for Prosperity” workshop in June in Bahrain.

The plan faces possible delays due to political upheaval in Israel, where Prime Minister Benjamin Netanyahu must fight another election after failing to form a government.

Kushner and Trump, with backgrounds in real estate rather than diplomacy, seem to be approaching this hitherto insoluble conflict as a transaction, three Arab officials briefed on the plan said.

Politically, the deal envisages an expansion of Gaza into part of northern Egypt, under Egyptian control, Palestinian officials briefed on the plan told Reuters. Palestinians would be left with a smaller share of the West Bank and some areas on the outskirts of Jerusalem and no control over their borders. Western and Arab sources confirmed the outline of the plan.

Jason Greenblatt, Trump’s Middle East envoy, said “rumors” about an expansion into Egypt’s Sinai desert were false. He declined to give details of the political plan before it is released.

On the decision not to use the term “two-state solution”, Grenblatt said: “We believe that using certain phrases and labels is not helpful because they lack detail and nuance &ndash; they mean different things to different people. The detailed plan, once released, will show what we think may be best solution for the two parties.”

The Palestinians are not buying it.

“The Palestinian cause is being liquidated – no Jerusalem (as capital), no right of return for refugees, no sovereign state. That is why this American project is dangerous,” one senior Palestinian leader told Reuters.

The deal as outlined so far has been dismissed by President Mahmoud Abbas’ western-backed Palestinian Authority in the Israeli-occupied West Bank.

Abbas has boycotted political dealings with the Trump administration for 18 months. This followed Trump’s decisions in 2017 to recognize Jerusalem as Israel’s capital and move the U.S. embassy there from Tel Aviv.

&nbsp;&nbsp;&nbsp; Since then, the Trump administration has curtailed aid to the Palestinian Authority, shuttered the Palestine Liberation Organisation (PLO) delegation in Washington and cut off finance to UNRWA, the U.N. agency supporting Palestinian refugees. Washington meanwhile endorsed Israel’s sovereignty over the Golan Heights.

“In practice, they have already started implementing ‘the deal of the century’,” the senior Palestinian leader said, “on the ground, step by step”. “Today, the two-state solution has been scuttled”.  Abbas is not alone in his view of the U.S. deal.

It was rejected by the Islamist Hamas movement, which does not recognize Israel’s right to exist and has only given conditional consent to a state in the occupied Palestinian territories.

The PLO has dismissed the Kushner effort as an attempt to bribe Palestinians into accepting Israeli occupation of the West Bank, a prelude to Israel annexing about half their territory and leaving them with scattered cantons.

Hanan Ashrawi, a moderate Palestinian leader, tweeted that the Kushner plan and the Bahrain conference were just “a handout to make our captivity palatable”.

Palestinian businessmen have opposed the Bahrain gathering despite a plea by Washington to attend, saying their political demands must be addressed in any peace plan.

Qatar said economic prosperity cannot be achieved without political solutions acceptable to Palestinians. Oman said anything that precludes the establishment of a Palestinian state will not be acceptable.

“We are not proposing an economic peace,” Greenblatt said. “We know that is not acceptable to the Palestinians. We’ve been very clear that the full plan includes a political component as well. But the economic plan is an essential component to the full plan.”

Robert Satloff, executive director of the Washington Institute for Near East Policy, an influential think-tank and supporter of Israel, wrote after interviewing Kushner this month that the deal is a political disaster that should be abandoned.

He said positive economic proposals could be lost by the attempt to skirt around Palestinian rights.

“The only way to protect the long-term viability of the plan’s best aspects is to kill it,” he said.

Satloff wrote that “unlike a real estate transaction in which one party gets the property and the other party gets the cash, a Middle East peace deal starts and ends with the two parties as neighbors, stuck with each other sharing a duplex for eternity”.

The meeting is to talk about the cash. The U.S. plan expects almost all of this  “$50 billion to $70 billion” to be put up by Gulf Arab allies, Saudi Arabia and the United Arab Emirates, Palestinian sources said. Yet even that is now moot.

That means uniting with Israel against Iran and concentrating on domestic challenges such as economic reforms and confronting Islamist radicals.

The Saudi crown prince maintains close ties with Kushner. But his father, King Salman, has twice said there will be no deal unless Israel meets Palestinian rights to a state.

“Kushner has been taken by surprise in his meetings in Riyadh recently, where there has definitely been a change in tone &ndash; in private and in public &ndash; by the Saudis,” said a senior western diplomat.

Asked for comment, the White House referred to its earlier official statement on Kushner’s February meeting with the crown prince and the king which said they discussed “increasing cooperation” and efforts to facilitate peace between Israelis and Palestinians.

The Palestinian official said it is clear that Israel “is creating a new reality on the ground” with the Trump administration’s help &ndash; not least by paving the way for the annexation of Jewish settlements in the West Bank.

The Palestinian and Arab officials briefed on the Kushner- Trump plan said its political contours, as explained to them, look like non-starters unless there is a peace deal.

The essential part is Gaza: where 2 million Palestinians are shut into a strip between Israel and Egypt. The idea is to expand it into the north of Egypt’s Sinai peninsula, creating an area where Palestinians can live and work under Egyptian control.

“The plan envisions Gaza stretching from Rafah (its southern border) to El Arish and some parts of Sinai. This area will be a Palestinian expansion in which Palestinians can reside,” the Palestinian leader said.

Big projects, such as an airport, a seaport, an industrial zone and power stations are envisaged, Palestinian sources briefed on the plan said.

On the West Bank, the plan is for Israel to annex and join up the settlements, take the Jordan valley and make it the Israeli border with Jordan, and leave the Palestinians a bit less than half as “an autonomous mini-state under some form of self-government”, the senior Palestinian leader said.

As for Jerusalem, Palestinians would get neighborhoods on the outskirts such as Abu Dis and Beit Hanina and Silwan: “not the real Jerusalem (but) they will tell them this is your Jerusalem”, the Palestinian leader added.

Western diplomats and intelligence sources worry about how the plan might affect Egypt and Jordan. However much money is offered, these sources question whether Egyptians would happily relinquish territory.And Jordan fears a Trump-backed Israel is returning to an old theme: Jordan is Palestine and that is where the Palestinians of the West Bank should go, they say.