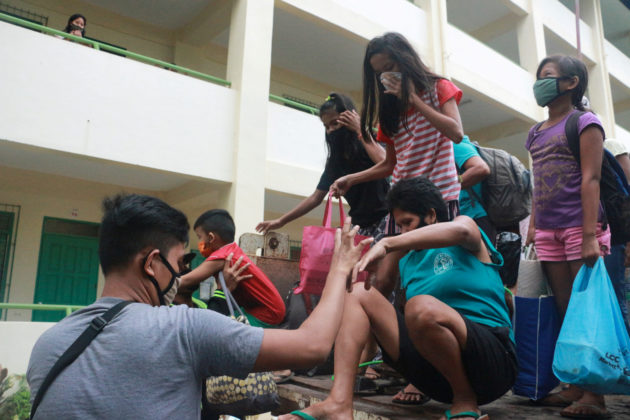 Residents wearing masks for protection against coronavirus disease (COVID-19) arrive at a school turned evacuation center as they prepare for Typhoon Vongfong in Legazpi City, Albay province, Philippines, May 14, 2020. REUTERS/Nino Luces NO RESALES. NO ARCHIVES

MANILA (Reuters) – The coronavirus pandemic is complicating Philippine efforts to move hundreds of thousands of people into evacuation centers where social distancing is hard to enforce as a strong typhoon pummeled through its eastern provinces.

Typhoon Vongfong, the first to hit the country this year, intensified after slamming into the eastern Philippines on Thursday afternoon, packing winds of 155 kilometers per hour (kph) and gusts of up to 255 kph (158 miles per hour), the state weather bureau said in a bulletin.

Provincial and city governments, many of which are already strapped for resources due to the outbreak, are grappling with logistical and space issues, with an estimated 200,000 people needed to be moved from their homes in coastal and mountainous areas because of fears of flooding and landslides.

“This is really a nightmare for us here,” Ben Evardone, governor of the Eastern Samar province, told CNN Philippines. “Our problem right now is where to squeeze our people, while making sure they practice social distancing”.

With an average of 20 typhoons every year hitting the Philippines, an archipelago of more than 7,000 islands, the challenges faced by stretched-thin local governments offer a grim preview of disaster response in the time of COVID-19.

The typhoon was forecast to move northwestward and hit Luzon, the country’s largest island that includes the capital Manila, which remains on lockdown.

In the town of Buhi in the province of Camarines Sur, hundreds of evacuees were given face masks before they were allowed in the evacuation centers.

There were no reported cases of the new coronavirus in Buhi, Nazarrea said, but “we want to minimize the risk”.

Classrooms that used to accommodate eight families during disasters are now housing only one to two families, he said.

The novel coronavirus has killed 790 people in the Philippines since the first local transmission was recorded in March, and infected close to 12,000.