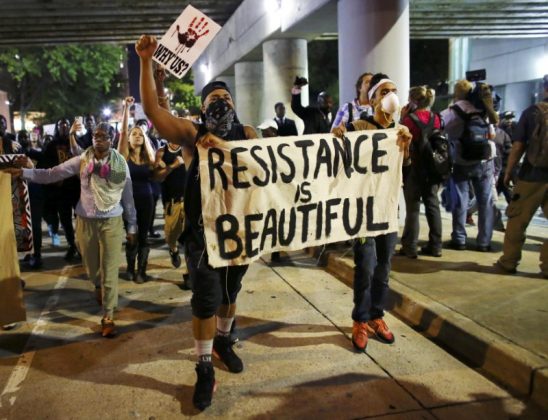 Protesters walk in the streets downtown during another night of protests over the police shooting of Keith Scott in Charlotte, North Carolina, U.S. September 22, 2016. REUTERS/Mike Blake

By Andy Sullivan and Robert MacMillan

CHARLOTTE, N.C. (Reuters) – Largely peaceful protests dwindled early on Friday in Charlotte, North Carolina, as police chose not to enforce a curfew prompted by two nights of riots after a black man was shot to death by a police officer.

A crowd of hundreds gathered, chanted and marched for a third successive night in the city of about 810,000 people, demanding justice for Keith Scott, 43, who was shot dead by a black police officer in the parking lot of an apartment complex on Tuesday afternoon.

He was the 214th black person killed by U.S. police this year out of an overall total of 821, according to Mapping Police Violence, another group created out of the protest movement. There is no national-level government data on police shootings.

A U.S. Congressman from North Carolina scrambled to apologize after telling the BBC in a broadcast interview that he believed that the protesters were motivated by jealousy.

“They hate white people because white people are successful and they’re not,” Robert Pittenger said in a televised interview late Thursday.

He later apologized on Twitter, saying, “What is taking place in my hometown breaks my heart. Today, my anguish led me to respond to a reporter’s question in a way that I regret.”

The Charlotte Police Department said on Twitter that two officers were treated after they were sprayed with a chemical agent by demonstrators and that no civilians were injured on Thursday.

Despite the brief outbursts, Thursday night’s demonstrations were calmer than those on the previous two nights in North Carolina’s largest city. Rioters had smashed storefront windows, looted businesses and thrown objects at police, prompting officials to declare a state of emergency and a curfew.

A protester who was shot on Wednesday died on Thursday. Nine people were injured and 44 were arrested in riots on Wednesday and Thursday morning.

Scott’s family viewed videos of the episode on Thursday and asked for them to be made public, stepping up the pressure on authorities.

In an interview with Reuters early Friday, Justin Bamberg, one of the lawyers who is representing Scott’s family, said the video shows that the 43-year-old did not make any aggressive moves towards police.

“There’s nothing in that video that shows him acting aggressively, threatening or maybe dangerous,” Bamberg said.

Scott, who suffered head trauma in a bad car accident a year ago, was moving slowly as he got out of the car, he said.

“He’s not an old man, but he’s moving like an old man” in the video, Bamberg said.

Earlier in the day, Bamberg said in a statement that it was “impossible to discern” from the videos what, if anything, Scott was holding in his hands.

Police say Scott was carrying a gun when he approached officers and ignored repeated orders to drop it. His family previously said he was holding a book, not a firearm, and now says it has more questions than answers after viewing two videos recorded by police body cameras.

Charlotte-Mecklenburg Police Chief Kerr Putney has said the video supported the police account of what happened but does not definitively show Scott pointing a gun at officers.

In contrast to the tension in Charlotte, the city of Tulsa, Oklahoma, was calm after a white police officer was charged with first-degree manslaughter on Thursday for a fatal shooting also captured on video. Police released a video of an unarmed black man, Terence Crutcher, being shot by the officer after his vehicle broke down on a highway.