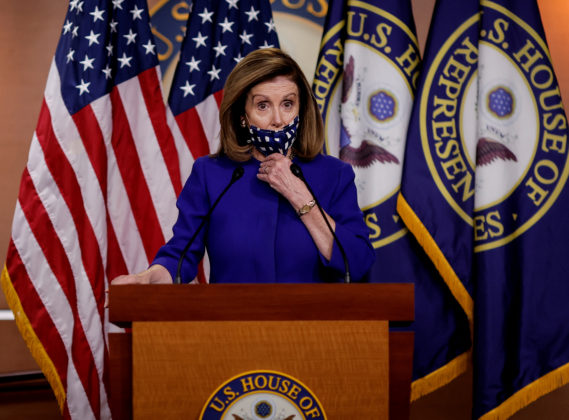 FILE PHOTO: U.S. House Speaker Nancy Pelosi adjusts her face mask as she announces her plans for Congress to create a "Commission on Presidential Capacity to Discharge the Powers and Duties of Office Act," after U.S. President Donald Trump came down with coronavirus disease (COVID-19), during a Capitol Hill news conference in Washington, U.S., October 9, 2020. REUTERS/Carlos Barria/File Photo

WASHINGTON (Reuters) – U.S. House Speaker Nancy Pelosi on Wednesday said she believed negotiations with the White House could produce a deal on a fresh COVID-19 relief bill despite Senate Republican opposition, but said it may not happen until after the election.

Pelosi, the nation’s top elected Democrat, continued talks with Treasury Secretary Steven Mnuchin on Wednesday afternoon, and a Pelosi spokesman said afterwards that they were closer to being able to “put pen to paper” on legislation.

Pelosi told MSNBC earlier that she wanted the bill to pass before the Nov. 3 elections, although her Republican counterpart, Senate Majority Leader Mitch McConnell, has not been an enthusiastic supporter.

“I’m optimistic, because even with what Mitch McConnell says, ‘We don’t want to do it before the election.’ But let’s keep working so that we can do it after the election,” she told MSNBC.

“We want to before, but again, I want people to know, help is on the way,” she said.

Republican President Donald Trump, trailing in national opinion polls ahead of Election Day, has increasingly called for action, but proposals for comprehensive relief have met resistance from conservative Senate Republicans.

Pelosi and Mnuchin are hammering out the details of a relief package that could be in the range of $2.2 trillion, the number Democrats have been pushing for months.

McConnell does not want to bring a large coronavirus aid bill to the Senate floor before the election, a senior Republican aide said, as he focuses on trying to confirm Trump’s Supreme Court nominee, Amy Coney Barrett.

Trump’s chief of staff, Mark Meadows, said Wednesday the White House was now looking at $1.9 trillion in relief. Meadows spoke to Fox News after lunching with Republican senators, who he said were concerned about the policy as well as the cost of a new package.

“I don’t think our chances get better after election,” Meadows told Fox.

Some Senate Republicans also said Wednesday that it might be more difficult to get a relief package passed after the election.

“If we’re gonna do it this year, I think it’s now or never,” said Senator Roy Blunt.

Other Republicans continued to express concern about the proposals under discussion.

Senator Steve Daines, who is in a tight re-election race in Montana, said a “big bone of contention” was the Democrats’ proposed spending on state and local governments, saying he objected to the idea that some states with budget problems would be “bailed out” by others.

“We want to get something passed, but having Montana taxpayers bail out California and New York is not the right thing to do.”

Senate Republicans have proposed smaller, targeted aid to help an economy reeling from the pandemic, which has infected 8.3 million Americans.

But Democrats seem just as determined not to go along with targeted aid proposals when a larger comprehensive deal appears in reach. A $500 billion Republican aid plan failed to clear a procedural hurdle in the Senate Wednesday, as Democrats voted to block it.

Pelosi’s spokesman, Drew Hammill, wrote on Twitter that Pelosi and Mnuchin would talk again on Thursday.

After quickly passing more than $3 trillion in relief early this year, aimed at salving the heavy human and economic toll of the COVID-19 pandemic, Congress has failed to pass any new measures since April to respond to a disease that has killed more than 221,000 Americans.

Trump insists that a bipartisan agreement between Pelosi and Mnuchin would find enough votes for passage in the Senate, where Republicans hold a 53-47 majority.

With opinion polls showing voters faulting Trump for his handling of the pandemic, Republicans are also facing a risk of losing their Senate majority. That has some members reverting to traditional Republican concerns about fiscal discipline.