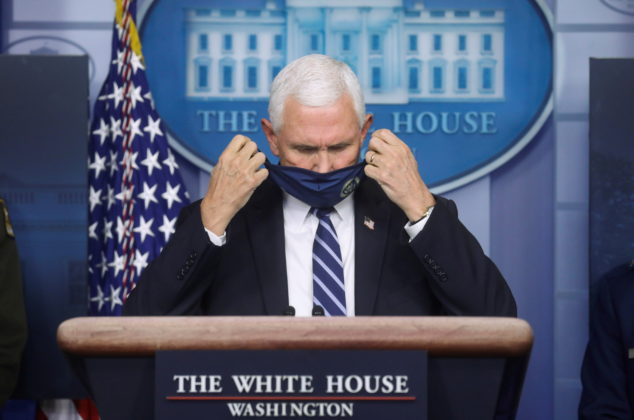 FILE PHOTO: U.S. Vice President Mike Pence takes off his protective face mask to speak as he leads a briefing by the White House coronavirus task force about the U.S. spread of coronavirus disease (COVID-19) in the Brady press briefing room at the White House in Washington, U.S., November 19, 2020. REUTERS/Leah Millis

“Georgia, I got back on the bus today because we need you to stay in the fight,” Pence told hundreds of cheering supporters at an outdoor event in Canton. “Stay in the fight until we send David Perdue and Kelly Loeffler back to a Republican majority.”

Democrats hope that challengers Jon Ossoff and Raphael Warnock will emerge victorious in the tight contests to give them a Senate majority that can push Biden’s agenda through Congress next year.

“Vote, Georgia!” Pence said, pausing to tell the crowd the exact time and place where early in-person voting will begin in their community on Dec. 14. “Be in line and vote!”

With Trump no longer on the ballot, Republicans and Democrats both face challenges getting large numbers of voters to the polls in January.

Pence, who the White House said will make repeated visits to Georgia ahead of the runoffs, traveled with U.S. Agriculture Secretary Sonny Perdue, a cousin of the senator and a leading party figure who served as the first Republican governor of Georgia since the post-Civil War Reconstruction.

Pence’s visit came at a time of infighting between Georgia Republicans.

Georgia has not elected a Democratic senator since 1996. But Republican confidence has been shaken by Biden’s narrow 49.5% to 49.2% lead over Trump, making him the first Democratic presidential candidate to win the state in nearly three decades.

Loeffler and Perdue ruffled party feathers by calling jointly for the resignation of Georgia Secretary of State Brad Raffensperger, a fellow Republican, as the state conducted a series of vote recounts focused on the presidential contest.

Loeffler also fought a bitter contest against Republican rival Doug Collins in the months leading up to the Nov. 3 election and may have alienated some Collins supporters.

Democrats, who netted only one Republican Senate seat nationwide in the election, need both Georgia seats to give them 50 of the Senate’s 100 seats, with Vice President-elect Kamala Harris wielding the tie-breaking vote.

Trump’s refusal to concede the presidential election is also complicating matters for Republicans by making it hard to rally voters to hold the line against a Biden presidency. Pence did not mention Biden in his remarks, portraying Democratic Senate leader Chuck Schumer and House Speaker Nancy Pelosi instead as political villains.

“Let’s show the world what Georgia’s all about, that the agenda of Chuck Schumer and Nancy Pelosi is not the agenda of the people of Georgia,” Pence said.

The vice president vowed that Trump would continue to contest the results of the presidential election, and drew periodic chants of “Stop the Steal!” and Four More Years!”

He steered clear of references to the intensifying coronavirus pandemic in addressing supporters, only some of whom wore masks with little social distancing.

Campaign donors and outside groups are pouring money and resources into the state for two-month runoff election campaigns that could see well over $100 million in overall spending.

Republicans have formed a fundraising network called the Georgia Battleground Fund led by scores of party celebrities including members of Congress, former governors and ambassadors. A source said the fund is seeking millions of dollars from donors in big states like Florida and Texas.

House Republican leader Kevin McCarthy, an honorary fund co-chair, chipped in $1 million for the Georgia races during a Zoom call on Thursday with 60 other House members that raised $2.7 million overall in just 30 minutes, according to a person familiar with the event.