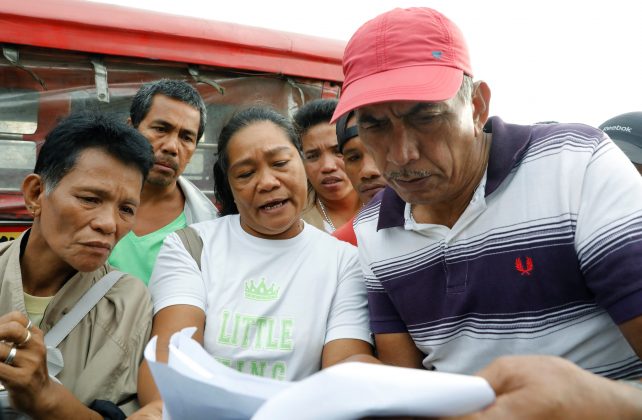 Filipinos look for their missing relatives on a list of survivors after a Philippine vessel capsized because of bad weather in Real, Quezon in the Philippines, December 22, 2017. Reuters/Erik De Castro

REAL, Philippines (Reuters) – The Philippines’ coast guard said on Friday it had rescued 252 passengers and crew, including an Australian and his Filipino wife, and recovered five dead people from a ferry that capsized east of the capital Manila.

A Philippine vessel capsized on Thursday because of bad weather, highlighting frequent boat accidents in the Southeast Asian nation that is composed of more than 7,000 islands.

The Philippine Coast Guard has confirmed five deaths while 252 passengers including an Australian and his Filipino wife, were rescued, said spokesman Captain Arm and Balilo.

The boat left the port around 9 a.m. and capsized an hour later due to strong winds and giant waves.

A survivor said the passengers panicked when the boat started to take in water and went to one side, causing the ferry to tilt and capsize.

“The others waited on top of the ship while it was sinking, but I didn’t do that because I know the ship will break down and I want to avoid getting hurt by that,” Rene Ebuenga, a rescued passenger told Reuters. “That’s dangerous and the big waves can slam debris to your body.”

The ferry capsized and sank about 5 miles off Quezon province, east of the capital on the main northern island of Luzon.

The Philippine Coast Guard said it will conduct an inquiry to determine the cause of the incident and to verify possible oil spills.

In 1987, nearly 5,000 people died in the world’s worst peacetime shipping disaster when an overloaded passenger ferry Dona Paz collided with an oil tanker off Mindoro island in the central Philippines.

Tropical storm Tembin, packing center winds of 80 kmh (49 mph), made landfall on the southern island of Mindanao early Friday. It weakened after hitting the land mass, the weather bureau said on Friday.

But, the weather agency warned of extensive flooding and landslides until the storm exits the Philippines on Sunday.