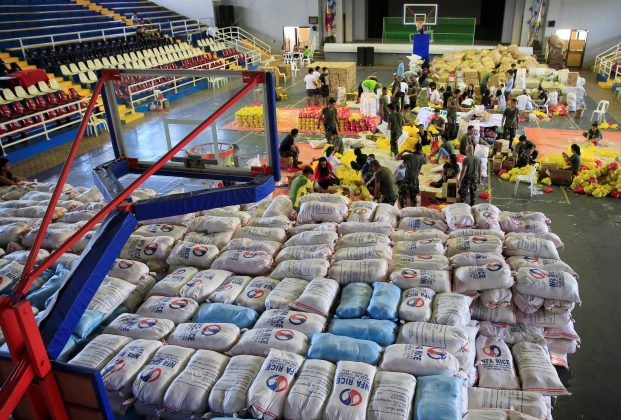 Soldiers and civilians prepare relief goods to be distributed to evacuees who are affected by the eruption of Mount Mayon volcano, in Legazpi city, Albay province, Philippines January 26, 2018. REUTERS/Romeo Ranoco

By Ronn Bautista and Roli Ng

LEGAZPI CITY, Philippines (Reuters) – The Philippines is bracing for a possible three-month-long emergency in areas around an erupting volcano, which has already displaced more than 81,000 and led to overcrowded temporary shelters, the disaster agency said on Friday.

Mount Mayon in central Albay province remained at alert level 4, a notch below the highest level, as it continued to spew lava, ash and other superheated material, volcanologists said.

Displaced families may need to stay in evacuation centres for that long, she said.

Food and other supplies remain adequate but concerns are growing over health and hygiene conditions at all the 69 temporary shelters away from the danger zone.

Respiratory illnesses are possible because of the series of ash falls, she said.

“We remain on red alert,” Marasigan told a media briefing, adding that 69,672 evacuees were housed in schools while nearly 12,000 took shelter in tents or went to relatives in more secure locations.

Health workers are giving free check-ups and medicine to elderly women and children in evacuation centres grappling with a sanitation shortage.

“The province is doing everything to close the gaps for these toilet facilities,” said Nestor Santiago, assistant secretary at the health ministry.

The number of cancelled flights has risen to 97, the disaster agency said.

Volcanologists said there were seven more episodes of intense but sporadic lava fountaining at the crater lasting several minutes during a 21-hour period from Thursday morning.

Despite the warnings, some residents have refused to abandon the danger zone, with farmers worrying about leaving crops and cattle unattended, while others split their time between homes and evacuation centres they say are crowded and uncomfortable.

Mayla Miraflor has a vehicle loaded and ready to flee if Mayon rages unchecked.

“We have this jeep when we need to run,” said Miraflor, who has eight children. “This is what we’ll use when the time comes. We will leave as soon as possible.”