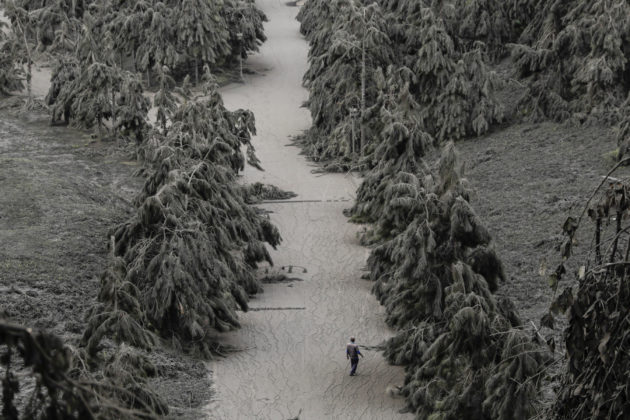 A man walks on a road blanketed with volcanic ash from the erupting Taal Volcano in Tagaytay, Philippines, January 14, 2020. REUTERS/Eloisa Lopez

MANILA (Reuters) – Nearly 40,000 people have been evacuated from near a Philippine volcano that could erupt violently at any moment, authorities said on Tuesday, but thousands more are refusing to leave or have already drifted back.

A cloud of ash and fountains of lava gushed for a third day from the crater of Taal, which lies in the middle of a lake about 70 km (45 miles) south of the center of the Philippines capital Manila.

Everyone living within 14 km (9 miles) of the volcano has been ordered to leave: potentially as many as 300,000 people, though disaster agency spokesman Mark Timbal said he believed the actual number who had been there was much lower.

Officially, 38,200 have now been evacuated, the agency said. 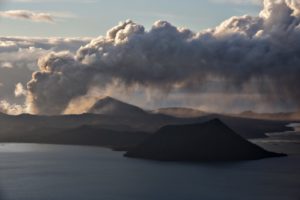 Local officials complained that many others were complicating the evacuation effort by staying put.

“I had to put Talisay under lockdown to prevent residents, who were already in the evacuation centers from returning,” said Gerry Natanauan, mayor of one town that is well within the danger zone of the 311 meter (1,020-foot) volcano.

“They wanted to check their homes, possessions and animals, but they’re not supposed to do that because it is very dangerous.”

Although Taal is one of the world’s smallest active volcanoes, it has a deadly history: an eruption in 1911 killed more than 1,300 people.

Several new fissures have opened, emitting plumes of steam, while dozens of tremors were felt as far as in Tagaytay city, a popular tourist destination 32 km (20 miles) away.

If an eruption happened, nobody would be able to return to their homes because they would be devastated, said Renato Solidum, director of the Philippine Institute of Volcanology and Seismology (Philvocs).

“The threat is really real,” he told a media briefing.

However, many refused to heed the warnings.

In part of Balete town, which sits on the edge of the danger zone, Red Cross trucks were sent to bring out 1,000 residents, but they left with only 130 because people thought they were far enough from the volcano, local authorities said.

No casualties have been reported so far, and seismologists said there was a chance this eruption could subside, but the signs still point to an imminent explosion.

Visiting the area on Tuesday, President Rodrigo Duterte joked that the government could try a traditional way to calm the volcano down.

“You should go there and, you know, say a little prayer and offer something. Let’s go by the primitive way of doing it just like what our forefathers would do,” he was quoted as saying by the Inquirer.Net website.

Taal has erupted more than 30 times in the past five centuries, most recently in 1977. A 1754 eruption lasted for months. The Philippines lies on the “Ring of Fire”, a belt of volcanoes circling the Pacific Ocean that is also prone to earthquakes.

In Manila, government offices reopened on Tuesday after being closed on Monday because of a fine layer of ash that drifted from the volcano, but schools remained shut and many people still wore face masks.