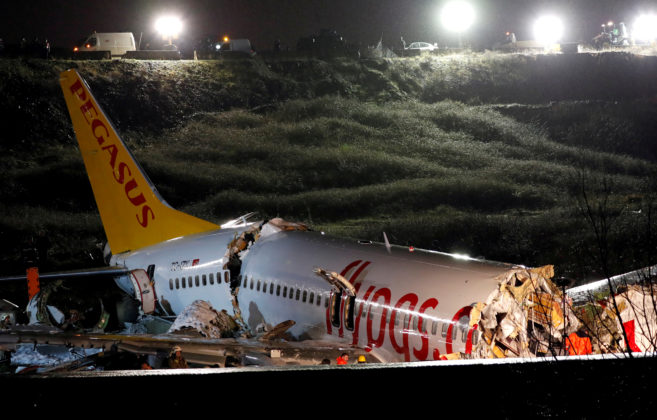 Reuters
ISTANBUL (Reuters) – The Dutch co-pilot of a Pegasus Airlines plane that skidded off the runway killing three passengers at Istanbul’s Sabiha Gokcen airport last month did not understand guidance in Turkish and failed to brake in time, according to a report seen by Reuters.

The Pegasus plane flying in from the western city of Izmir sped off the end of the wet runway and broke into three pieces after a drop of 30 meters. State media later said the flight’s captain was arrested.

According to a preliminary report seen by Reuters on Thursday, the control tower initially told the pilot to hold off from landing due to harsh weather.

But it said the Dutch co-pilot did not understand the Turkish guidance. It said the tower then allowed the plane to land, but that the pilots did not brake in a timely manner.

Officials from Pegasus were not immediately available to comment on the report.

“When the speed indicator showed 57 knots, speed brakes and thrust reversers were turned off and manual braking was turned back on,” the report said.

“The deceleration when the first manual brake was used at a ground speed of 84 knots was not enough, therefore (the plane) ran off the runway at a speed of 60 knots,” it said.

The report also said that audio recordings from the flight showed the pilots panicked over possible damage after the plane was struck by lightning some six minutes before landing.