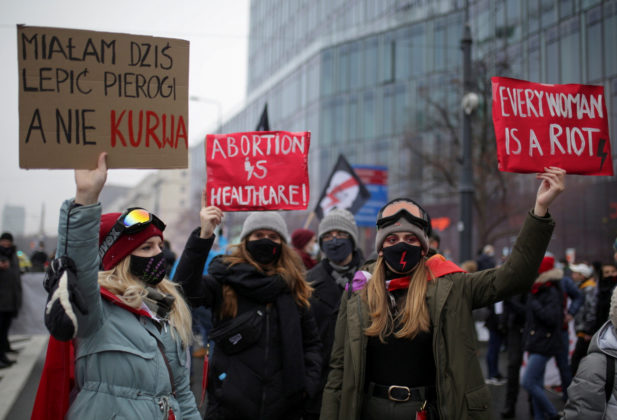 FILE PHOTO: A rally organised by Poland's Women Strike movement on the anniversary of the martial law crackdown by the former communist regime, in Warsaw, Poland December 13, 2020. Adam Stepien/Agencja Gazeta via REUTERS

By Anna Koper and Joanna Plucinska

In October, the Constitutional Court said termination of pregnancies due to fetal defects should be banned, ending the most common of the few legal grounds for abortion that remained in the largely Roman Catholic country.

Under the ruling, abortions are now only permitted in cases of rape and incest, and when the mother’s life or health is endangered, pushing Poland further from the European mainstream.

Officials from the ruling Law and Justice (PiS) party said the government would now focus on assisting parents of disabled children, although PiS and its predecessors have been accused by critics of not doing enough to help such families so far.

“The state can no longer take a life away only because someone is sick, disabled, in poor health,” PiS lawmaker Bartlomiej Wroblewski told Reuters.

Conservative values have taken a more prominent role in public life since the nationalist PiS took power in 2015. Access to abortion has declined even without the legislative curbs as more doctors refuse to perform the procedure on religious grounds.

Opponents of PiS have accused it of influencing the ruling, because the Constitutional Tribunal is one of the judicial bodies overhauled by the party during reforms that the European Union says have politicized the courts.

The government information center said the court’s verdict would be published in its official gazette – a step necessary for it to take effect – later on Wednesday.

Abortion rights activities called for opponents of the ruling to gather in the streets across Poland following the government’s announcement, which had been expected for weeks.

“We are inviting everyone, please, go out, be motivated, so we can walk together, make a mark,” protest group leader Marta Lempart told news conference.

Opinion surveys have shown some decline in PiS popularity in recent months, but a poll by the government-affiliated CBOS pollster showed it edging back up to 35% this month, from 30% in October. PiS and its two small parliamentary allies won re-election in 2019 with a 44% share of the vote.