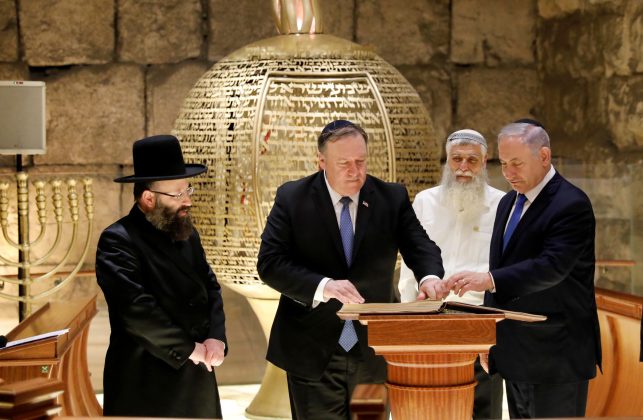 JERUSALEM (Reuters) – U.S. Secretary of State Mike Pompeo accompanied Israel’s prime minister on a visit to the Western Wall in Jerusalem’s Old City on Thursday in the first such gesture since Washington recognized Jerusalem as Israel’s capital, angering Palestinians.

The ancient Western Wall, the most sacred prayer site in Judaism, is located in the eastern part of the city that Israel captured in the 1967 Middle East war and later annexed in a move not recognized internationally.

Israel has long considered all of Jerusalem as its eternal, indivisible capital, while Palestinians want East Jerusalem as the capital of a future state they seek in territory Israel took in the June 1967 war. 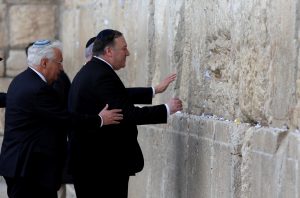 Later that year Trump reversed decades of U.S. policy and officially recognized Jerusalem as the Israeli capital, though making clear that he was not prejudging a settlement on where the city’s borders should be.

Since that shift, the U.S. ambassador to Israel has paid visits to the Western Wall along with Netanyahu. Pompeo suggested that his own visit as the top U.S. diplomat in Netanyahu’s presence was significant.

“I think it’s symbolic that a senior American official goes there with the prime minister of Israel,” he told reporters prior to arriving in the walled Old City.

The Western Wall is a remnant of the compound of a Jewish temple destroyed by the Romans in 70 AD. The elevated plaza above it is the Noble Sanctuary, the third holiest site in Islam, containing the al-Aqsa mosque and the Dome of the Rock.

Pompeo, Netanyahu and U.S. Ambassador David Friedman together approached the wall and each leaned against its massive stones with one hand. Pompeo then placed a prayer note in between the stones, as is customary.

Before going to the wall, he visited the nearby Church of the Holy Sepulchre, believed to be site of Jesus’ crucifixion and burial.

Pompeo, now on a Middle East tour, visited Kuwait before Israel and is due to proceed to Lebanon. His trip to Israel, three weeks before a closely contested election, was portrayed in local media as a Trump administration boost for the right-wing Netanyahu.