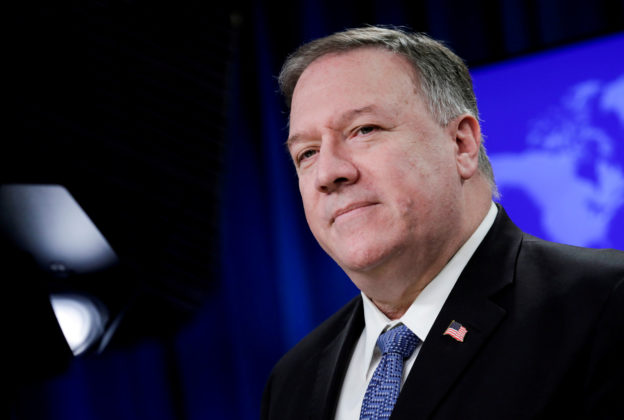 WASHINGTON (Reuters) – U.S. Secretary of State Mike Pompeo warned Iraq’s prime minister that the United States would take measures in self-defense if attacked, according to a statement on Monday after a rocket attack on an Iraqi base that houses U.S. troops helping fight Islamic State.

Pompeo spoke to Prime Minister Adel Abdul Mahdi on Sunday, a day after three American troops and several Iraqi forces were wounded in the second major rocket attack in the past week on an Iraqi base north of Baghdad, U.S. and Iraqi officials said, raising the stakes in an escalating cycle of attacks and reprisals.

He said Iraq’s government should defend the U.S.-led coalition helping it fight Islamic State, according to the statement from State Department spokeswoman Morgan Ortagus.

“Secretary Pompeo underscored that the groups responsible for these attacks must be held accountable. Secretary Pompeo noted that America will not tolerate attacks and threats to American lives and will take additional action as necessary in self-defense,” it said.

Iraq’s Joint Operations Command said 33 Katyusha rockets were launched near a section of the Taji base which houses U.S.-led coalition troops. It said the military found seven rocket launchers and 24 unused rockets in the nearby Abu Izam area.

The Iraqi military said several Iraqi air defense servicemen were critically wounded. Two of the three wounded U.S. troops are seriously injured and are being treated at a military hospital in Baghdad, the Pentagon said.

Longstanding antagonism between the United States and Iran has mostly played out on Iraqi soil in recent months.

Iranian-backed paramilitary groups have regularly rocketed and shelled bases in Iraq which host U.S. forces and the area around the U.S. Embassy in Baghdad.