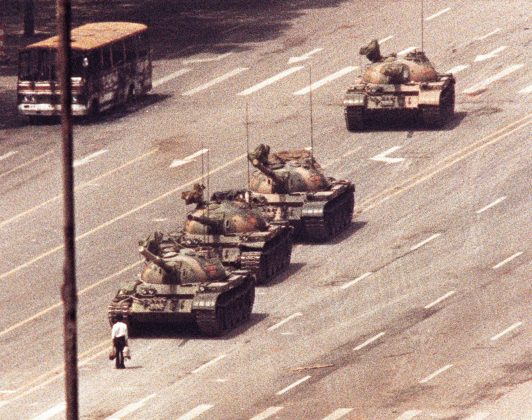 FILE PHOTO: A man stands in front of a convoy of tanks in the Avenue of Eternal Peace in Beijing, China, June 5, 1989. REUTERS/Arthur Tsang/File Photo

WASHINGTON (Reuters) – U.S. Secretary of State Mike Pompeo on Monday called on Beijing to mark the 30th anniversary of the Tiananmen Square uprising this week by releasing all prisoners jailed for fighting human rights abuses in China.

In a statement, Pompeo again urged China to make a full public account of those killed or missing in the 1989 student-led pro-democracy protests in and around Beijing’s Tiananmen Square.

“Such a step would begin to demonstrate the Communist Party’s willingness to respect human rights and fundamental freedoms,” Pompeo said.

“We call on China to release all those held for seeking to exercise these rights and freedoms, halt the use of arbitrary detention, and reverse counterproductive policies that conflate terrorism with religious and political expression,” he added.

The Chinese government sent tanks to quell the June 4, 1989 protests, and has never released a death toll. Estimates from human rights groups and witnesses range from several hundred to several thousand.

The Tiananmen crackdown is a taboo subject in China and almost 30 years later it remains a point of contention between China and many Western countries.

State Department spokeswoman Morgan Ortagus upset China when she referred to the Tiananmen demonstrations as a “full-on massacre of peaceful protesters” during a briefing last week. Chinese Defense Minister Wei Fenghe said on Sunday that the crackdown was the “correct” decision, citing the country’s “stability” since then.

Pompeo said China’s human rights record had not improved despite its rise on the international stage and condemned the treatment of the country’s estimated 1.5 million Uighurs and other Muslim groups in Xinjiang region.

“China’s one-party state tolerates no dissent and abuses human rights whenever it serves its interests,” said Pompeo. “Today, Chinese citizens have been subjected to a new wave of abuses, especially in Xinjiang, where the Communist Party leadership is methodically attempting to strangle Uighur culture and stamp out the Islamic faith.”

(Reporting by Lesley Wroughton in Washington; Editing by James Dalgleish)