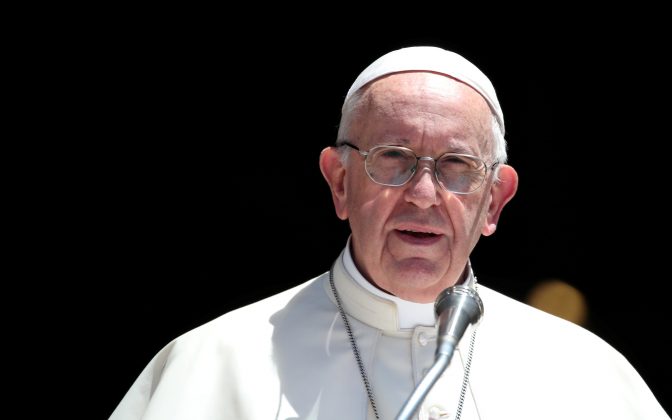 FILE PHOTO: Pope Francis delivers a speech after a meeting with Patriarchs of the churches of the Middle East at the St. Nicholas Basilica in Bari, southern Italy July 7, 2018. REUTERS/Tony Gentile/File Photo

VATICAN CITY (Reuters) – Pope Francis, facing sexual abuse crises in several countries, wrote an unprecedented letter to all Catholics on Monday, asking each one of them to help root out “this culture of death” and vowing there would be no more cover-ups.

In a highly personal letter addressed to “the people of God,” Church language for all members, the pope appeared to be launching an appeal for all Catholics to face the crisis together and not let it tear the Church apart.

The Catholic Church in the United States, Chile, Australia, and Ireland – where the pope is making a two-day visit this weekend – are reeling from crises involving sexual abuse of minors. Numerous surveys have pointed to plummeting confidence in the Church in those countries and elsewhere.

In his letter, the pope referred to the suffering endured by minors due to sexual abuse at the hands of a “significant number of clerics and consecrated persons.”

The Vatican said it was the first time a pope had written to all of the world’s some 1.2 billion Catholics about sexual abuse. Past letters on sexual abuse scandals have been addressed to bishops and faithful of individual countries.

“We have realized that these wounds never disappear and that they require us forcefully to condemn these atrocities and join forces in uprooting this culture of death,” he said.

Quoting a Gospel passage that says “If one member suffers, all suffer together,” Francis added:

“(Those words) forcefully echo in my heart as I acknowledge once more the suffering endured by many minors due to sexual abuse, the abuse of power and the abuse of conscience perpetrated by a significant number of clerics and consecrated persons.”

“With shame and repentance, we acknowledge as an ecclesial community that we were not where we should have been, that we did not act in a timely manner, realizing the magnitude and the

gravity of the damage done to so many lives. We showed no care for the little ones; we abandoned them,” Francis wrote.

“He needs an effective discipline process for bishops and religious superiors who are known to have enabled abuse,” she said.

Last week a grand jury in the U.S. state of Pennsylvania released the findings of the largest-ever investigation of sex abuse in the U.S. Catholic Church, finding that 301 priests in the state had sexually abused minors over the past 70 years.

CRYING OUT TO HEAVEN

He acknowledged that “the heart-wrenching pain of these victims, which cries out to heaven, was long ignored, kept

“Looking ahead to the future, no effort must be spared to create a culture able to prevent such situations from happening, but also to prevent the possibility of their being covered up and perpetuated,” he said.

He also acknowledged that the implementation of a zero tolerance had been “delayed” in some places.

Victims groups have said that while new policies have been put into place in several countries to alert civil authorities about cases of abuse, the pope still needed to do more to hold accountable bishops who covered it up, mostly by moving priests from parish to parish.

In his first direct response to the U.S. grand jury report, Francis said that while most cases it listed “belong to the past,” it was clear that the abuse cited “was long ignored, kept quiet or silenced”.

Last month, Theodore McCarrick, the former archbishop of Washington, D.C., and one of the U.S. Church’s most prominent figures, stepped down as a cardinal after accusations that he abused two minors about 50 years ago and later abused adult seminarians.

He was believed to be the first cardinal to lose his red hat in nearly a century and the first ever for alleged sexual abuse.

In May, all 34 of Chile’s bishops offered their resignation to the pope over a widening sexual abuse crisis there. He has so far accepted five of the resignations.