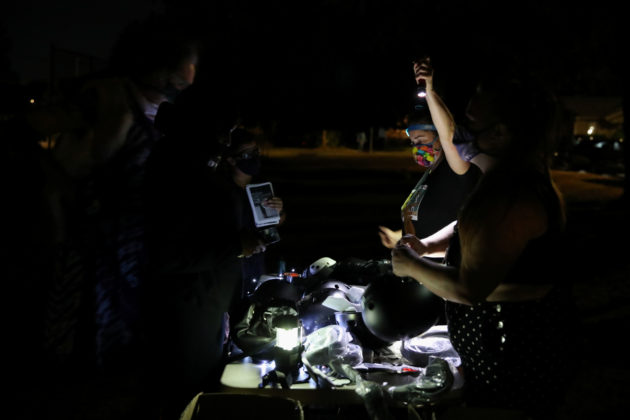 Protesters hand out helmets and other protective equipment before a demonstration against police violence and racial inequality in Portland, Oregon, U.S., September 2, 2020. REUTERS/Caitlin Ochs

(Reuters) – Several demonstrators were arrested in Portland after they threw rocks and projectiles at police officials, authorities in the U.S. city said.

The police said early on Thursday that demonstrators began a march around 11 p.m. local time, adding that officers closed a street and ordered protesters to not enter the area or risk facing arrest.

“Despite the announcements, the crowd continued to gather on Northeast Emerson Street.” Portland Police said. “Some people in the group threw projectiles such as water bottles and rocks towards officers.”

The police said they made “targeted arrests” without disclosing a figure.

Police said they did not use any crowd control munitions or tear gas.

Demonstrations against racism and police brutality have swept the United States since the death in May of George Floyd, a 46-year-old Black man who died after a Minneapolis police officer knelt on his neck for nearly nine minutes.

Portland, in particular, has seen over three months of daily demonstrations calling for policing and social justice reforms. These have at times turned into clashes between demonstrators and officers, as well as between right- and left-wing groups.

One person was shot dead on Saturday as rival groups clashed.

The administration of U.S. President Donald Trump deployed federal forces to Portland in July to crack down on the protests.

Trump signed a memo on Wednesday that threatens to cut federal funding to “lawless” cities, including Portland.