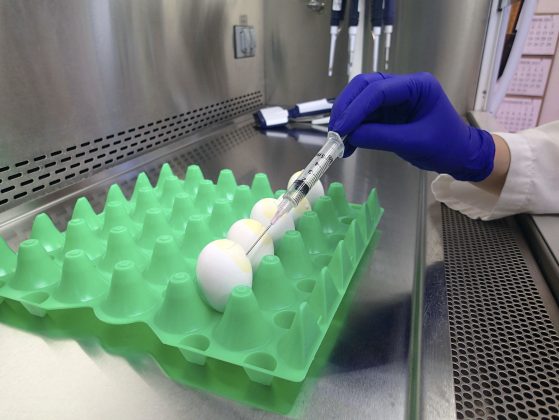 FILE PHOTO: The Avian influenza virus is harvested from a chicken egg as part of a diagnostic process in this undated U.S. Department of Agriculture (USDA) handout image. Erica Spackman/USDA/Handout/File Photo via REUTERS

CHICAGO (Reuters) – Aviagen [EWESJA.UL], the world’s leading poultry breeding company, has euthanized chickens at a farm in Alabama over concerns about bird flu, the company said on Tuesday, as likely cases of the disease emerged in a top chicken-producing state.

Alabama officials said they suspected that poultry at three sites in the state were infected with the virus, about a week after some 90,500 chickens were culled over infections at two commercial operations across the border in Tennessee.

Aviagen detected the presence of antibodies for the flu virus in a flock in Alabama that showed “no evidence of clinical disease,” company spokeswoman Marla Robinson said in an email. The company is based in Alabama.

The company euthanized the flock and “all eggs which were collected from that farm in the production system were traced and removed,” she said. Aviagen did not respond to a question about how many birds were killed.

A national USDA lab is testing samples from poultry in Alabama to identify the strain of the virus and how lethal it is for birds, after another agency-approved lab identified the H7 subtype of the disease in samples, USDA spokeswoman Lyndsay Cole said.

The birds in Alabama did not show clinical signs of sickness, which indicates they did not have a highly lethal, or pathogenic, form of the virus, Cole said.

In Tennessee, both cases were identified as H7N9. The USDA on March 5 confirmed that one was the United States’ first infection of highly pathogenic flu in commercial poultry in a year. Days later, the state said it had found the other case nearby and it was low pathogenic.

Highly pathogenic bird flu led to the deaths of about 50 million birds, mostly egg-laying hens, in the United States in 2014 and 2015.

Another highly pathogenic outbreak would likely represent a financial blow for poultry operators such as Tyson Foods Inc and Pilgrim’s Pride Corp because it would kill more birds or require flocks to be culled.

It also would likely trigger more import bans from trading partners, after South Korea, Japan and other countries limited imports after the highly pathogenic case in Tennessee.

Health officials have said the risk of bird flu spreading to people from poultry or making food unsafe was low.

Separately, Frazier said the owner of a backyard flock suspected of having the virus chose to cull about 70 birds. No poultry linked to the third suspected case, which involved birds at a flea market, have been culled, he said.

Frazier said the cases were still only suspected flu infections and needed to be confirmed by the USDA. Earlier, the Alabama Department of Agriculture and Industries called a news conference to discuss what it said were three findings of avian influenza.

Alabama raised more than 1 billion chickens for meat in 2015, making it the country’s third largest producer, according to the USDA.

The national USDA laboratory, to which samples from the state were sent, is the only one in the United States that officially confirms cases.