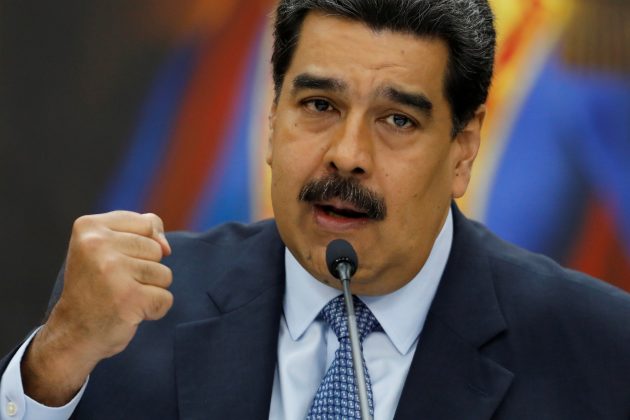 Leaders from the ruling Socialist Party have disavowed criticism of Maduro’s inauguration, which will keep him at the helm of the OPEC member until 2025, and called for rallies in his support.

Opposition leaders, however, have portrayed the inauguration as the moment at which Maduro will be internationally branded a dictator following a widely boycotted 2018 election that many foreign governments described as a farce.

But continued support from the military, a fractured opposition and a relentless crackdown on opposition critics means that Maduro appears to face few serious challenges at home, despite the international outcry.

“They’ve tried to turn a constitutional swearing-in ceremony into a world war,” Maduro said during a news conference on Wednesday. “But whether there’s rain, thunder or lightning, we’re going to triumph.”

He will be sworn in by the Supreme Court rather than the opposition-run congress, which has been stripped of its powers since the Socialist Party lost control of it in 2016 – a move that underpins opposition criticism that Maduro has consolidated a dictatorship.

Maduro will then head to a ceremony at Venezuela’s military academy, signaling the importance of the armed forces in his governing coalition.

That contrasts sharply with the Venezuela of today.

Inflation is fast approaching 2 million percent. Some three million people have emigrated since 2015 – many on foot – to escape malnutrition and disease, according to the United Nations.

Bank notes that once paid for months’ worth of groceries are now tossed in trash cans or even woven into multi-colored women’s handbags sold by street merchants.

Maduro last year won reelection despite the economic chaos in large part because the opposition boycotted the vote. He blames an “economic war” led by the United States and the domestic opposition to try to undermine socialism as the cause for the country’s woes.

“I agree with the measures that Venezuela is taking,” said Francisco Rivas, 53, a state employee wearing a red shirt who joined a crowd outside the Miraflores presidential palace in support of Maduro. “[Maduro] is looking out for the wellbeing of the Venezuelan people, but many have betrayed him.”

The United States and many Latin American and European countries condemned the vote, leaving Maduro backed by just a handful of stalwart allies from leftist governments.

There are few signs that countries will shutter embassies or sever ties with Venezuela, according to diplomatic sources, but most will not send diplomats to the inauguration.

Opposition activists have called for protests on Thursday. Authorities have responded by filling streets with police checkpoints and rifle-toting troops.

“They’re trying to scare us so that we don’t protest,” said Henry Ramirez, 39, a computer engineer in the western city of San Cristobal, attempting to cut into a line for gasoline, the type of queue that has become increasingly frequent during the crisis. “Tomorrow the dictatorship continues.”

While politically motivated demonstrations have faded, protests take place nearly every day to demand salary improvements, access to food and medicine, or improvements to erratic power and water services. Even supporters of Chavez’s “Bolivarian revolution” were losing patience with the economy.

“I ask that the president focus on increasing wages,” said Daveli Valecillos, a 29-year-old homemaker who traveled to Caracas from the eastern state of Monagas to witness the inauguration. “Every time prices go up it’s a blow to this country, and we don’t know how much longer we can last.”

But many had lost hope that Maduro’s inauguration could change anything.

“I’m just trying to get a few more documents together so I can leave the country,” said Angela Perez, 26, who works the cash register at a fast-food restaurant in the city of Valencia. “There’s no future here. It’s sad but true.”