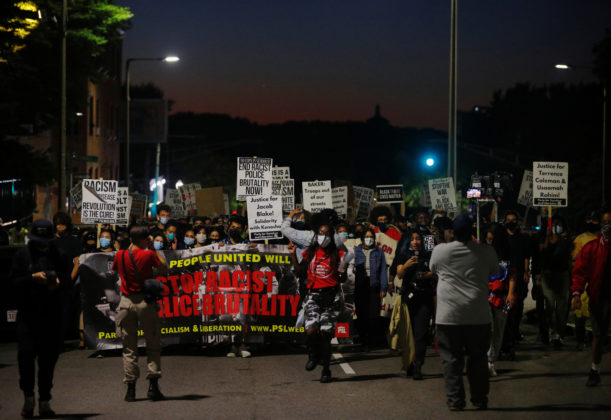 FILE PHOTO: Demonstrators march in a rally against racial inequality and to call for justice a week after Black man Jacob Blake was shot several times by police in Kenosha, in Boston, Massachusetts, U.S., August 30, 2020. REUTERS/Brian Snyder

(Reuters) – Four people arrested for curfew violations while protesting the shooting of a Black man by a white policeman in Kenosha, Wisconsin sued the city and county governments on Tuesday, claiming they were denied free speech rights guaranteed by the U.S. Constitution.

The plaintiffs argue that more than 150 people protesting the shooting have been taken into custody while pro-police demonstrators have been allowed to freely take to the streets, according to the lawsuit filed in federal court for the Eastern District of Wisconsin.

“In Kenosha, there are two sets of laws – one that applies to those who protest police brutality and racism, and another for those who support the police,” the plaintiffs argue in their complaint, which seeks a temporary restraining order until the litigation can be heard in court.

Reuters could not reach city and county officials for comment after business hours.

Kenosha has been the scene of sometimes violent protests after video footage surfaced showing a police officer shooting Jacob Blake, 29, multiple times in the back.

Blake was left paralyzed from the waist down and the officer, Rusten Sheskey, was placed on administrative leave during an investigation.

The protesters claim in their lawsuit that police were using the curfew to prevent them from taking part in constitutionally protected activity.

The plaintiffs also say police are selectively enforcing the curfew by not arresting pro-police demonstrators, a violation of equal protection under the law guaranteed by the constitution.

The lawsuit, which seeks unspecified monetary damages, was filed on the same day that U.S. President Donald Trump visited Kenosha over the objections of some local officials.

(Reporting by Keith Coffman in Denver; Editing by Dan Whitcomb and Stephen Coates)