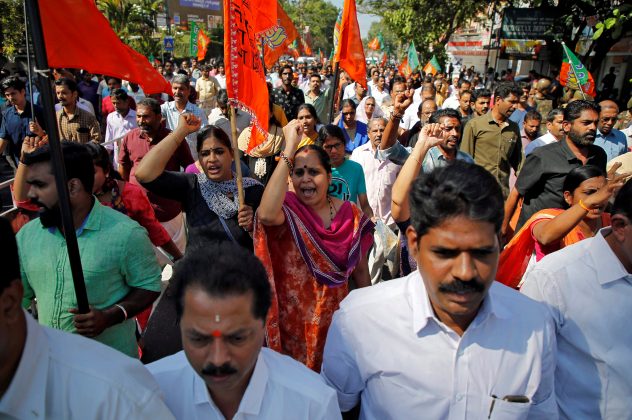 By Sudarshan Varadhan and Neha Dasgupta

Many small businesses were shut after the groups called for a state-wide stoppage. Most bus services were halted and taxis were refusing to take passengers as some drivers said they feared they would be attacked.

Some protesters burst makeshift bombs outside a police station in the state capital of Thiruvananthapuram, police said.

On Thursday morning, about 400 protesters – including some women – marched towards the main city junction in Kochi, the commercial capital of Kerala, to stage a sit-in, shouting slogans and waving flags, with streets otherwise deserted.

They were backed by officials from Prime Minister Narendra Modi’s Bharatiya Janata Party (BJP) and Rashtriya Swayamsevak Sangh (RSS), the ideological parent of the BJP.

India’s Supreme Court in September ordered the lifting of the ban on women of menstruating age entering the Sabarimala hill temple, which draws millions of worshippers a year.

The temple has refused to abide by the ruling and subsequent attempts by women to visit have been blocked by thousands of devotees.

On Wednesday, two women were escorted by police into the temple through a side gate. They offered prayers from the top of a staircase where they could see the deity below without drawing the attention of the priest or other devotees, a police official familiar with the operation said.

He did not wish to be identified due to the sensitivity of the issue.

The Kerala state government is run by left-wing parties and has sought to allow women into the temple, a position that has drawn criticism from both of India’s main political parties, the ruling BJP and the opposition Congress. 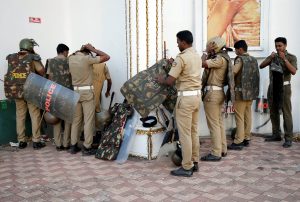 Policemen wear riot gear before the start of a rally during a strike called by Hindu nationalist Bharatiya Janata Party (BJP) and Rashtriya Swayamsevak Sangh (RSS) to protest against state government for allowing two women to defy an ancient ban and enter the Sabarimala temple, in Kochi, India, January 3, 2019. REUTERS/Sivaram V

The state’s Chief Minister Pinarayi Vijayan told reporters women were the target of some attacks by protesters, including women journalists covering the event.

On Wednesday, a woman police constable was molested by five protesters near Kochi, while a protester was pelted with stones and killed in a southern district of the state, police said.

A majority of stores in one of the busiest markets in Kochi remained shut even after protesters dispersed in the evening, according to M.C.K Jaleel, the state joint secretary of Kerala Samsthana Vyapari Vyavasayi Samithi, one of the largest merchant associations in the city.

The women, Bindu Ammini, 42, and Kanaka Durga, 44, had approached state police to find a way to enter the temple after a failed attempt on Dec. 24.

For more than a week before Wednesday’s visit, the women were under police protection at an undisclosed location, unknown even to their families, to prevent the plan from leaking out, the police official said.

In the early hours of Wednesday, the police took the two women to the hill temple inside an ambulance to avoid attention. Medical services are frequently used outside the temple to help the elderly who go on the trek, the official said.

After offering prayers, the women merged with the crowd and headed to the exit, accompanied by four police in plain clothes, the police official said.

“Every minute, about 100 devotees throng to the sanctum sanctorum and there was no way the priest would have noticed these two,” he said.

Several women turned away by devotees in previous attempts to enter the temple said they had faced a backlash.

Bindhu Thankam Kalyani, 43, a teacher in Kerala, who tried to enter Sabarimala in October, said she was harassed by protesters. “They would come to my school and intimidate me,” she said.

However, some women who support the ban have criticized the women, saying they were defying religious tradition.

“We have been taught from our childhood that women should not go,” said Saritha C. Nair, 35, an entrepreneur.