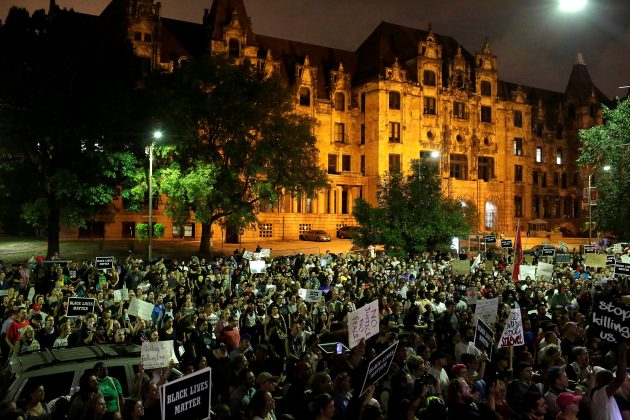 Demonstrators continue to protest for a fourth day after the not guilty verdict in the murder trial of Jason Stockley, a former St. Louis police officer, charged with the 2011 shooting of Anthony Lamar Smith, who was black, in St. Louis, Missouri, U.S., September 18, 2017. REUTERS/Joshua Lott

ST. LOUIS (Reuters) – The legacies of racism, not only the violent protests that gripped St. Louis after a white former police officer was acquitted of murdering a black man, must be addressed, the city’s mayor said on Tuesday.

Mayor Lyda Krewson said she had listened and read the reaction of residents since the controversial verdict on Friday and was ready to find ways to move the city forward.

“What we are seeing and feeling is not only about this case,” Krewson told reporters.

“What we have is a legacy of policies that have disproportionately impacted people along racial and economic lines,” she added. “This is institutional racism.”

The city has been working to expedite existing plans to increase equity as well as develop new approaches, including changing how police shootings are investigated and granting subpoena powers to a police civilian oversight board, and expanding jobs programs, Krewson said.

“We, here in St. Louis, are once again ground zero for the frustration and anger at our shared legacy of these disproportional outcomes,” she said. “The only option is to move forward.”

Krewson said town halls scheduled for Tuesday night and later were canceled. As she spoke, dozens of protesters chanted outside her office.

Some activists had planned to voice complaints about police tactics used during protests after a judge found former officer Jason Stockley, 36, not guilty of first-degree murder in the killing of Anthony Lamar Smith, 24.

Largely peaceful protests during the day have turned violent at night with some demonstrators carrying guns, bats and hammers, smashing windows and clashing with police. Police arrested 123 people on Sunday, when officers in riot gear used pepper spray on activists.

The clashes have evoked memories of riots following the 2014 shooting of a black teenager by a white officer in nearby Ferguson.

Protesters have cited anger over a police tactic known as “kettling,” in which officers form a square surrounding protesters to make arrests. Some caught inside police lines Sunday said officers used excessive force, according to the St. Louis Post-Dispatch.

St. Louis police are also investigating whether some of its officers chanted “Whose streets? Our streets,” appropriating a refrain used by the protesters that one civilian oversight official said could inflame tensions.

“I wish that wouldn’t have been said,” Krewson said.

The American Civil Liberties Union of Missouri asked the city in a Tuesday letter to preserve video evidence ahead of what it said was a likely lawsuit challenging police tactics.

Complaints of police misconduct were being reviewed, but intimidation tactics would not be tolerated, Krewson said. Police had generally shown “great restraint,” she said.

(Reporting by Chris Kenning in Chicago; Editing by Robin Pomeroy and Steve Orlofsky)