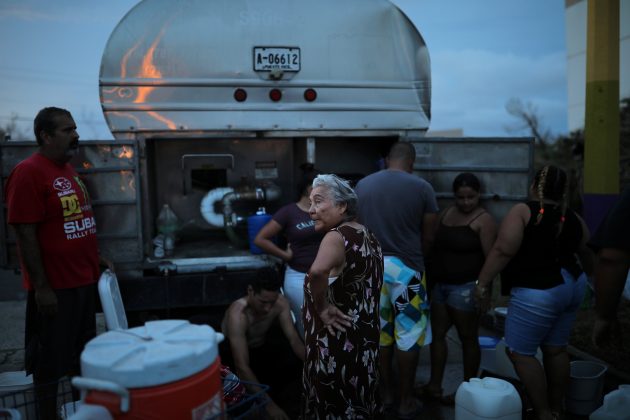 FAJARDO, Puerto Rico (Reuters) – Brian Jimenez had burned through dwindling supplies of scarce gasoline on a 45-minute drive in search of somewhere to fill his grandmother’s blood thinner prescription. He ended up in Fajardo, a scruffy town of strip malls on Puerto Rico’s northeastern tip, where a line of 400 waited outside a Walmart.

The store had drawn desperate crowds of storm victims who had heard it took credit or debit cards and offered customers $20 cash back – a lifeline in an increasingly cashless society. Store employees allowed customers in, one by one, for rationed shopping trips of 15 minutes each.

Then, at noon, the store closed after its generator croaked and before Jimenez could get inside to buy his grandmother’s medicine.

“Every day we say, ‘What’s the thing that we need the most today?’ and then we wait in a line for that,” said Jimenez, a 24-year-old medical student from Ponce, on the island’s southern coast.

By Saturday, 11 days after Hurricane Maria crippled this impoverished U.S. territory, residents scrambled for all the staples of modern society – food, water, fuel, medicine, currency – in a grinding survival struggle that has gripped Puerto Ricans across social classes.

For days now, residents have awoken each morning to decide which lifeline they should pursue: gasoline at the few open stations, food and bottled water at the few grocery stores with fuel for generators, or scarce cash at the few operating banks or ATMs. The pursuit of just one of these essentials can consume an entire day – if the mission succeeds at all – as hordes of increasingly desperate residents wait in 12-hour lines.

As criticism mounts about a slow disaster response by President Donald Trump’s administration, residents here in Fajardo said that had seen little if any presence from the federal government. Across the island, the sporadic presence of the Federal Emergency Management Agency or the U.S. military stood in sharp contrast to their comparatively ubiquitous presence after hurricanes Harvey and Irma recently hit Texas and Florida.

The severe shortages have thrown even relatively affluent Puerto Ricans into the same plight as the hundreds of thousands of poor residents here. The broad humanitarian crisis highlights the extreme difficulty of getting local or federal disaster relief to a remote U.S. island territory with an already fragile infrastructure and deeply indebted government.

Even those here with money to spend now cannot often access it or find places open and supplied to spend it as stores are shuttered for lack of electric power, diesel for generators, supplies or employees.

Jimenez’s failed trip to Walmart came after chasing groceries at a store near Yabucoa, near where his grandmother lived. He planned to spend the next day in one of the miles-long gas lines that snake from stations onto highways and up exit ramps.

At the beginning of many lines were stations already out of gas – but motorists still waited, hoping a fuel supply truck would eventually arrive.

“We wasted gas getting here and going back,” Jimenez said as he watched police usher dejected customers away from Walmart’s entrance. “The gas lines are ridiculous. Fifty cars is wonderful. Most are 100-plus cars.”

Another customer turned away from the Walmart, Daniel Santiago, 51, said he had waited in a gas line for 12 hours one day and 14 hours the next. Neither attempt had been successful, so he, his wife and three daughters had walked three miles to the Fajardo shopping complex, where they waited in line for the Econo grocery.

“We have to do this every day,” Santiago said. “Yesterday, we came down walking. The day before that, we walked up a really big hill to try to get a signal to contact our family.”

That had not worked either.

Even before the storm hit and knocked out the island’s dilapidated electric grid – an outage expected to persist for months – Puerto Rico was suffering through a growing economic crisis that dates back to 2006. The island has an unemployment rate more than twice the U.S. national average and a 45 percent poverty rate.

The island had earlier this year filed the biggest bankruptcy in U.S. municipal history in the face of a $72 billion debt load and near-insolvent public health and pension systems.

“We’re not at the phase where we are focusing on comfort,” Rossello said. “Unfortunately, that’s the current reality that we’re dealing with.”

His team was still scrambling to open roads to communities blocked by landslides, and to deliver food, water, medicines and generators to remote homes and hospitals.

The island’s battered infrastructure left Manny De La Rosa, 31, to crisscross the island with his pregnant wife, Mayra Melendez, also 31. They were trying to find places to spend the $40 in coins they had extracted from the family piggybank.

“All of our money is held up in the bank,” De La Rosa said.

They live in Luquillo in the northeast, but found an ATM in Humacao on the southeastern coast. Their cell phones vibrated to life for the first time alongside a stretch of highway in Isla Verde, nearly an hour west of their home.

Now, they were in line in Fajardo, hoping to buy supplies with a credit card to conserve their cash.

“We see these lines, and we think, ‘We’re not even going to make it before the money runs out,’” Melendez said, standing in front of the Walmart. 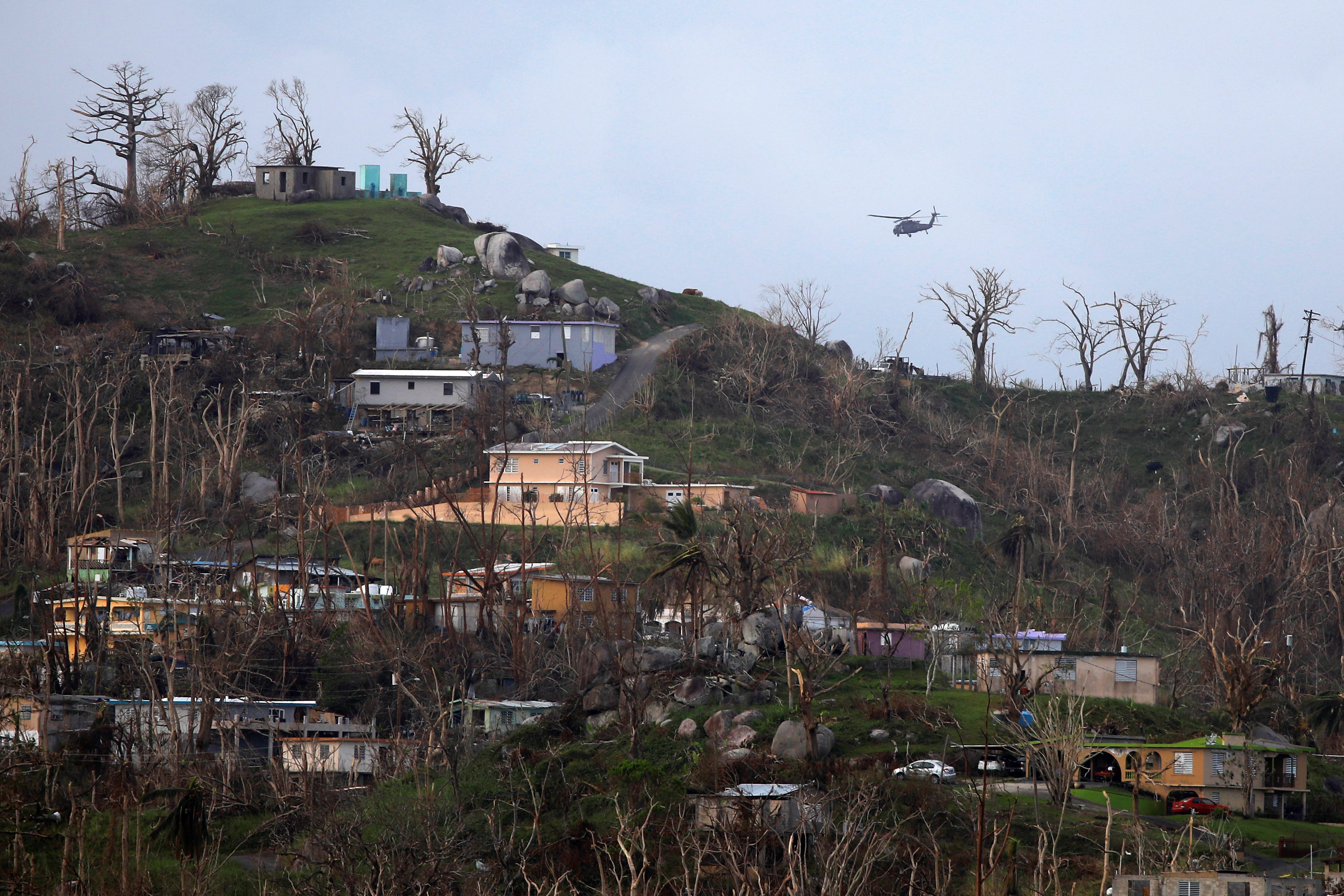 In the economically depressed agricultural town of Salinas, an hour-and-a-half drive from Fajardo on the island’s southern coast, 93-year-old Lucia Santiago sat outside in a lawn chair and rested her swollen legs.

Her son, Jose Melero, 67, brought her food that had been delivered by the town’s mayor on a golf cart.

“We have to be out here, because we’d die from the heat in there,” he said, gesturing toward the house.

The two had started eating less every day to conserve provisions. That day, they had split a can of ravioli and a piece of bread.

Melero was down to $14 of cash without the means to withdraw more.

“I have no idea how I’m going to get through the next few days,” he said. “We have money, but we just can’t get to it.”

Others in isolated areas struggled to find medicine. U.S. Army veteran Sandalio DeJesus Maldonado, 87, took a 7 a.m. ferry from his home on Culebra, an island off Puerto Rico’s eastern coast, to Fajardo, to refill blood pressure and prostate medications.

The hurricane had shuttered Culebra’s only pharmacy, DeJesus said.

In Fajardo, DeJesus waited at an overcrowded Walgreens because he did not have enough gas to drive to the Veterans Affairs hospital where he normally filled his prescriptions.

As he waited in line late Saturday morning, DeJesus fretted that he would not be able to return to Culebra until after 5 p.m., when the only scheduled ferry was slated to depart.