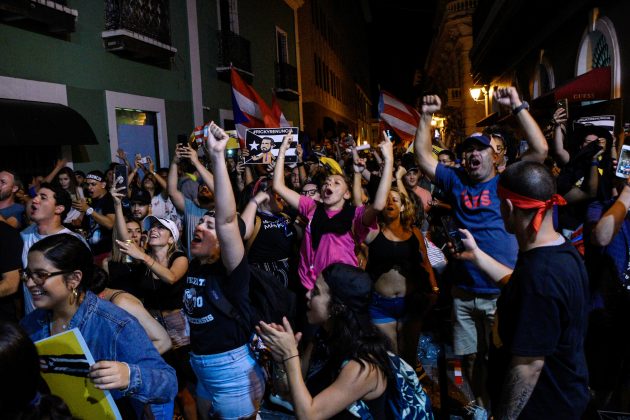 SAN JUAN (Reuters) – People danced in the streets of San Juan’s old city on Thursday, after Puerto Rico Governor Ricardo Rossello bowed to protesters’ demands and said he would quit over profane chat messages and a corruption scandal that have sparked massive demonstrations.

The continuing celebrations were tempered by the fact that protesters weren’t enthused over Secretary of Justice Wanda Vazquez being next in line to succeed Rossello based on current cabinet vacancies.

One protester waved a sign reading “Wanda, we don’t want you either” and another shouted, “Wanda, you’re next!” 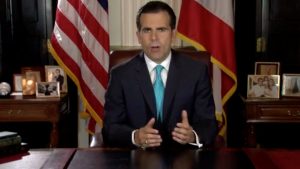 After 12 days of sometimes violent demonstrations, first-term governor Rossello said he would step down on Aug. 2, having failed to soothe critics by vowing not to seek re-election and giving up the leadership of his political party.

“To continue in this position would make it difficult for the success that I have achieved to endure,” Rossello said in an overnight address, listing accomplishments in office that ranged from creating new industries to promoting equal pay for women.

Rossello’s term as governor has seen the island hit with back-to-back 2017 hurricanes that killed some 3,000 people and wreaked widespread destruction, just months after the U.S. territory filed for bankruptcy to restructure $120 billion of debt and pension obligations.

Thousands of protesters in San Juan’s historic Old City erupted in joy when news broke that Rossello was stepping down.

Others, including Natal’s girlfriend, were more measured.

“I’m really, really, really, really happy, but I know we need to stay right here, screaming,” said Julie Rivera, 21, who was already planning to return after dawn for another protest against the woman Rossello has tapped to succeed him.

Vazquez, a 59-year-old former district attorney, was too close to Rossello, Rivera said.

“During our career in public service, we’ve shown that we’ve worked in a righteous and honest manner to benefit the public,” Vazquez told Puerto Rican media.

After celebrating late into the night, hundreds of protesters joined a morning rally in the city’s financial district to mark the governor’s resignation and make clear their opposition to Vazquez.

“I turn to all my fellow Puerto Ricans to ask them for peace and tranquility,” said Gonzalez, a Republican and member of Rossello’s party. “The new governor, Wanda Vazquez, has all my support, experience and resources.”

Multiple Democratic members of U.S. congress urged their colleagues not to use the political turmoil as a reason to limit federal funding for the disaster-rocked island or to block a plan to increase federal Medicare funding for the island by $12 billion over four years..

“The people of Puerto Rico are at stake here, not any particular individual that happens to be in the governor’s seat right now,” U.S. Representative, Raúl Grijalva the Democratic chairman of the National Resources Committee, said in a video posted online.

The final straw for many on the island came July 13 when Puerto Rico’s Center for Investigative Journalism published 889 pages of chat messages between Rossello and 11 close allies.

In messages between November 2018 and January 2019, the group made profane and sometimes violent statements about female political opponents, gay singer Ricky Martin and ordinary Puerto Ricans.

The chats tapped into simmering resentment toward the island’s political elites, drawing an estimated 500,000 people onto a San Juan highway on Monday to demand that Rossello quit as governor of the island’s 3.2 million people.

Rossello also faced the twin threats of an investigation by the island’s Department of Justice and political impeachment by its legislature.

Not all Puerto Ricans were delighted at Rossello’s fall.

While Ricky Shub, 33, agreed that the former scientist in his first elected office should step down, he said Rossello had become a lightning rod for decades of pent-up anger.

“He’s taking the fall for a bunch of past governors that put us in this position,” said Shub, watching the celebrations in the old city from his friend’s roof deck. “Everyone here is right to do what they’re doing, but they should have done it 20 years ago.”