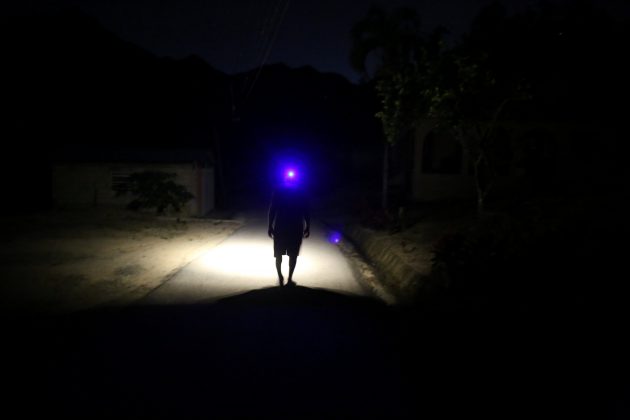 Jose Alvarez, 60, uses a head lamp while walking in the dark as the island's fragile power system is still reeling from the devastation wrought by Hurricane Maria eight months ago, in Jayuya, Puerto Rico May 10, 2018. REUTERS/Alvin Baez

By Jessica Resnick-Ault and Nick Brown

NEW YORK (Reuters) – The U.S. federal agency tasked with restoring electricity to Puerto Rico, after Hurricane Maria hit the Caribbean last year, is leaving the island though thousands still have no power heading into the next hurricane season starting next month.

Only a last-minute request from the governor of the island, bemoaning the “fragile state” of the power grid, managed to keep most of the generators brought by the Federal Emergency Management Agency (FEMA) on Puerto Rican soil for another six months.

The remaining generators might help keep the lights on for hospitals or police stations if the island gets hit again during the coming hurricane season, which begins June 1. 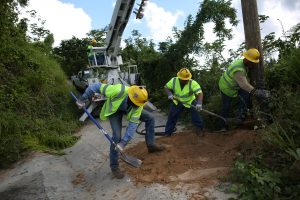 Contractors of the U.S. Army Corps of Engineers install an electricity pole as the island’s fragile power system is still reeling from the devastation wrought by Hurricane Maria eight months ago, in Utuado, Puerto Rico May 17, 2018. REUTERS/Alvin Baez

Most power has been restored by the U.S. Army Corps of Engineers but the electricity grid remains unreliable, and suffered an island-wide blackout last month.

“The whole world is very nervous about hurricane time,” said Rosalina Abreu Gonzalez, who lives near Mariana, on the eastern side of the island, where power has still not been restored. “There is a real concern – the government hasn’t provided an energy system that is more secure.”

The Army Corps, a unit of the U.S. armed forces, has said its task is largely complete now that most people have power. About 22,000 customers are still without electricity, most in remote areas, according to the new head of the island’s power utility, the Puerto Rico Electric Power Authority.

“Our mission wasn’t to build a modern resilient system,” Charles Alexander, Director of Contingency Operations and Homeland Security Headquarters at the Army Corps, said at a Senate hearing last week.

New PREPA Chief Executive Walter Higgins, who has only been on the job for two months, said he is focusing on emergency procedures in the event of another disaster in coming months.

He said there is a plan for building a more resilient grid in the future. Higgins took over from Ricardo Ramos, who resigned as CEO in November after coming under fire for signing unvetted, little-known contractors to restore power, rather than immediately ask for assistance from other utilities.

“Unfortunately, pain causes learning, and what we’ve learned is how to get mutual assistance called for and on the island immediately,” Higgins told Reuters. 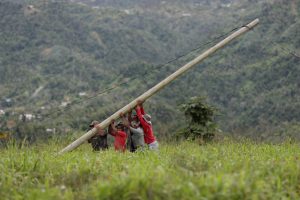 Residents of La Chorrera neighbourhood carry an electricity pole as the island’s fragile power system is still reeling from the devastation wrought by Hurricane Maria eight months ago, in Utuado, Puerto Rico May 11, 2018. REUTERS/Alvin Baez

Still, PREPA’s grid lacks buried power lines or reinforced poles, common in other hurricane prone areas. The power utility ran up an $8 billion debt over many years, largely due to poor bill collection, causing the system to fall into disrepair.

“It is very hard to see these messages where the government is saying we’re ready for next season. We’re not,” said Sheylda Diaz, a biology professor who lives near Utuado, in the island’s center, where some lines and poles have yet to be fixed.

The Army Corps will not provide further line restoration after Friday, FEMA said.

“People here have no idea that they are leaving,” said Abreu Gonzalez, who runs a center where people without power can go for meals.

Higgins said he sympathizes with those who want the Corps to remain. “I can understand why somebody would want them to stay longer, as long as there’s a single customer out.”

Maria hit shortly after Hurricanes Harvey and Irma slammed the U.S. mainland in 2017, but in both cases, power was largely restored within a week.

“I cannot imagine a scenario where 20,000-plus Texans or 20,000 Floridians were without power and FEMA would make that decision,” said Sen. Martin Heinrich, a Democrat from New Mexico. “I think that’s reprehensible.”