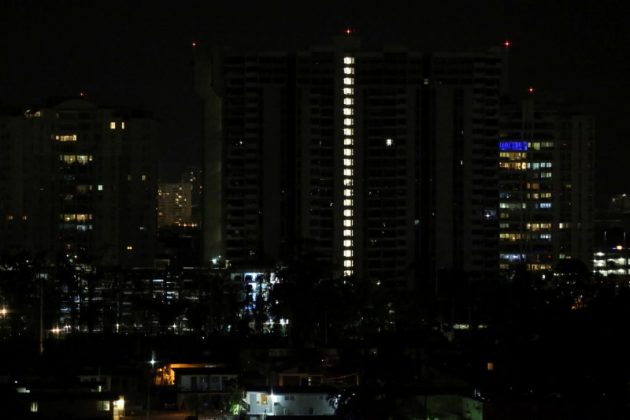 NEW YORK (Reuters) – Puerto Rico’s power company said it had restored power to over 1.1 million homes and businesses by Thursday morning after a transmission line failure cut service to almost all of the island’s 3.4 million residents the day before.

The Puerto Rican Electric Power Authority, known as PREPA, was working to restore power to the less than 30 percent of customers in the U.S. territory still without power after Wednesday morning’s blackout.

The power line failure in southern Puerto Rico was the latest in a string of operational and political headaches for the bankrupt, storm-ravaged power utility.

The utility has struggled to escape the headlines since Hurricane Maria wiped out power to all of Puerto Rico on Sept. 20.

Maria, the worst storm to hit the island in 90 years, devastated Puerto Rico’s electrical grid, and thousands were still without power at the time of Wednesday’s blackout.

PREPA said on Twitter that several power plants were back in service, including units at Central Aguirre, EcoElectrica, Central Costa Sur, Yabucoa and Palo Seco.

The blackout was caused by the failure of a 230-kilovolt transmission line between the oil-fired Aguirre generating complex in Salinas and AES Corp’s &lt;AES.N&gt; coal-fired power plant in Guayama, PREPA said in a statement on Wednesday.

PREPA estimated on Wednesday that it would take 24 to 36 hours to restore service to all customers that had power before Wednesday’s blackout.

Before the outage, PREPA said 1.43 million homes and businesses had electric service. That is 97.2 percent of the utility’s 1.47 million total customers.

Many of the remaining 40,000 customers have been without power since Hurricane Maria.

PREPA has suffered several blackouts since the storm, including an outage last week affecting about 870,000 customers, and has been in bankruptcy since July, owing some $9 billion to mutual funds, hedge funds and other investors.