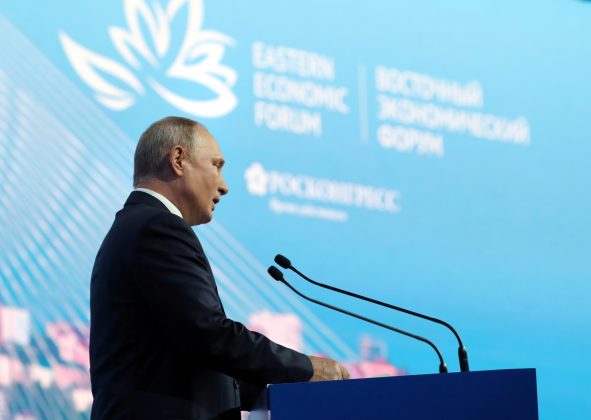 By Gabrielle Tétrault-Farber and Vladimir Soldatkin

VLADIVOSTOK, Russia (Reuters) – President Vladimir Putin said on Thursday that Russia would produce missiles that were banned under a landmark Cold-War era nuclear pact that ended last month, but that Moscow would not deploy them unless the United States did so first.

Speaking at an economic forum in Russia’s Far East, Putin said Moscow had urged the United States to de-escalate a spiraling arms race between the former Cold War foes, but that Washington had not responded.

The Russian leader said he was concerned by U.S. talk of deploying missiles in Japan and South Korea, a deployment he said would cover parts of Russian territory.

Last month the United States tested a conventionally-configured cruise missile that hit a target more than 500 km away, a test that would have been prohibited under the INF.

The pact banned land-based missiles with a range of 310-3,400 miles, reducing the ability of both countries to launch a nuclear strike at short notice.

“…Of course we will produce such missiles,” Putin told an economic forum in the Russian city of Vladivostok. He repeated a pledge by Moscow not to deploy any new missiles unless the United States does so first.

“We are not happy about the fact that the head of the Pentagon said that the United States intends to deploy them in Japan and South Korea, this saddens us and is a cause for certain concern,” Putin said.

Putin said he offered U.S. President Donald Trump in a recent phone call the chance to buy one of the hypersonic nuclear weapons Moscow is developing. He said Trump spurned the offer and replied that Washington was making its own.

Putin said he feared that an arms race could spread into space and that Washington could develop a new space weapon.