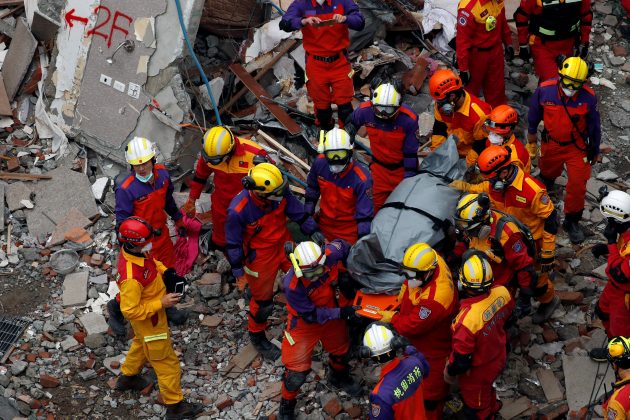 A body of a Hong Kong Canadian is carried out from a collapsed building after an earthquake hit Hualien, Taiwan February 9, 2018. REUTERS/Tyrone Siu

By Fabian Hamacher and Natalie Thomas

HUALIEN, Taiwan (Reuters) – Rescue operations in Taiwan started to wind down on Friday after a devastating 6.4-magnitude earthquake rocked the tourist area of Hualien this week, taking a toll of 12 dead and five missing.

More than 200 aftershocks followed, hampering a round-the-clock rescue effort in which emergency personnel battled rain and cold to comb rubble in a search for survivors.

Efforts on Friday narrowed to finding five Chinese nationals still missing after rescuers pulled two bodies, identified as Canadian citizens from Hong Kong, out of a 12-storey residential building that had been left tilting at a 45-degree angle. 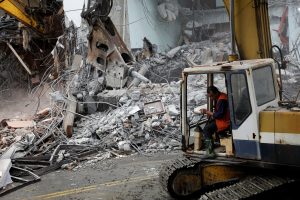 Authorities said they would focus their search on the single building where the five missing were believed to be.

“The military will continue to prioritize today rescuing the missing people in the Yun Men Tsui Ti residential building,” it said in a statement.

The building’s extreme displacement made the search tough, the government said in a statement, adding, “The space for our operations is small, so the progress of search and rescue can be slow.”

Power was restored to all affected areas in Hualien, although 8,500 homes are still without water.

The military will work with local government officials to develop a plan to demolish a hotel, a residential building and other dangerous buildings, it said in its statement.

The government vowed to redouble efforts to revise building regulations, aiming to limit damage in any future episodes.

Taiwan revised its building act on Jan. 30 to strengthen investigations of the structures of existing buildings and inspection of completed projects, the interior ministry said on Friday.

The revision, expected to be discussed by a cabinet meeting at the end of February, would also seek third-party views in building assessments, it said.

The government added that it would hasten reconstruction of old buildings to make them earthquake-resistant and work to boost the safety of other structures in affected areas.